Every year at Fantasia, there are no shortage of zombie flicks. In the five days I was there, I caught no fewer than three, the first of which was a Canadian feature called A Little Bit Zombie. 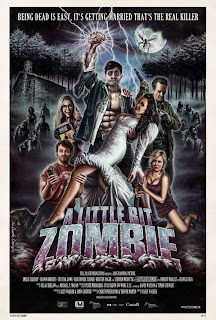 After being bitten by a zombified mosquito while on a pre-wedding getaway, Steve (Kristopher Turner) slowly begins to crave a certain type of food. Brains!

This is one of those movies that probably shouldn't work, but does. As I am sure you are well aware, zombie comedies are a dime a dozen these days. I wasn't expecting much, but I found it to be quite entertaining. It immediately set a certain tone that, if you were willing to get on board with, had a charming quality to it. It was much in line with something like 2004's Dead & Breakfast – without the musical bits of course – where the ensemble elevated the piece as a whole.

A Little Bit Zombie contained very few things that I usually look forward to in zombie flicks, and yet I didn't miss them. I mean, there were an abundance of Evil Dead references, as just looking at the poster above should tell you, but there was little zombie killing and only a smattering of gore. Again, it came down to the spot-on cast keeping me interested in their bumblings on how to deal with Steve's “condition”.

A certain amount of credit must naturally go to the writers Trevor Martin & Christopher Bond, but I can't stress enough how important the cast were in making this a successful venture. The main foursome of A Little Bit Zombie were great. Each character was little more than an exaggerated caricature, but it worked because they played off each other so well. Turner anchored the movie with his physical comedy, as well as keeping his controlling fiancee Tina (Crystal Lowe) and his stand-offish sister Sarah (Kristen Hager) from killing each other. My favourite though, was Steve's best man Craig, played by Shawn Roberts. His comic relief and mannerisms kept the movie hopping. I couldn't believe it when I later discovered that he also played Albert Wesker in the last two Resident Evil films.

The ubiquitous Stephen McHattie camps it up huge as the zombie hunter, Max. Think Ash & Reggie, but ten times more cantakerous. He is complimented by his partner Penelope (Emilie Ullerup) as they spend the entire movie bickering about their on-the-job techniques. In addition to McHattie, the movie is rife with many other recognizable faces. As it was filmed in Ontario – Sudbury to be precise – A Little Bit Zombie attracted a lot of local talent. Roger Maillet shows up as a town drunk, as does George Buza. I had to laugh at the symmetry of Buza's appearance, considering his role in Ed Hunt's The Brain.

A lot of cast and crew turned up for the Q&A, which is always a bonus. Director Casey Walker spoke about the long road of getting his movie made. It was a crowd funded – the first apparently – project through his website mymilliondollarmovie.com. Mostly, he just seemed elated that he was able to finally show off what he had spent almost six years bringing to fruition. The high point was when McHattie broke out into an impromptu reading of one of the racier passages from Fifty Shades of Grey.

This was a train wreck from start to finish. Rating: F

Haha, the movie, or my review?

The film. I can understand how one can get caught up in a movie when viewing it live at a movie festival with the cast present. I watch a lot of zombie movies. This wasn't a good one. Having a low budget is no excuse.

Fair enough. I still say the ensemble worked well together.