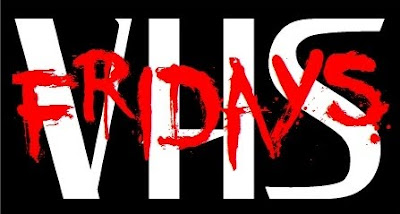 This week I watched the Dean Crow's Indianian import Backwoods (aka Geek) from 1987. 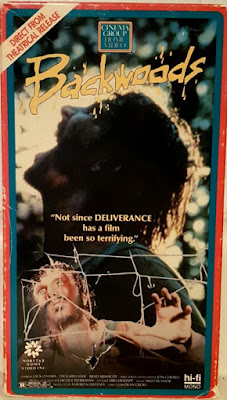 A couple biking across America run afoul of a family living deep in the woods.

I feel like this film has been slightly misrepresented by both its coverbox and Imdb. The cover above says “direct from theatrical release”, but I wager that is inaccurate. Sure, it may have played a few fests, but the number of slow zooms in this movie screamed direct-to-video. Also, Imdb makes it sound like a carbon copy of American Gothic (the movie I watched last week) but that isn't the case either.

Imdb states that the family patriarch was in on it, but that's not the case. He's not homicidal, he's just cantankerous. And when he gets into the moonshine, he warms right up imparting such pearls of wisdom like “the woman warms the bed in these parts!”

Backwoods took a while to get going, like people biking across the Mid West? Who does that? If I got roped into that bullshit activity, I would bitch about it as much as Jamie (Brad Armacost) does in this movie. So when old man Eben (Dick Kruesser) showed up and invited the couple to dinner, I actually started to find his performance endearing. Like Jamie, Eben & Karen (Christine Noonan) might all end up being pals. Then Willie the Geek (Jack O'Hara) showed up and ruined everything.

Like American Gothic, the dangerous offspring didn't show up until over a half-hour in. I do have to commend O'Hara because he's all in on this role. Considering the lack of a “no animals were harmed” banner in the end credits, I wouldn't be surprised if he was pulling the heads off real chickens.

It was right about here that the protagonists' motivations became idiotic. Like, who would leave their significant other alone with someone who is clearly unstable. Get the fuck out of there, guys! Oh, things went awry! Who would've thought? This whole section was real clumsy to the point that I had to guess what happened to one of the characters.

Backwoods brought me back in when the heroine had to bust out some Just Before Dawn-esque resourcefulness that resulted in some glorious overkill. Then it kind of killed that buzz with an ending that made no sense whatsoever. This movie just wasn't that well shot and the set pieces are haphazardly edited together. I also think that a better score could have done wonders, as this one, supplied by Skeet Bushor, was as cheesy and repetitive as they come.

Apart from some flavour added by Kruesser & O'Hara and a decent climax, there really isn't much to write home about here. This alternate UK poster is pretty bad-ass though.