Okay guys. Be sure to buckle up because I've got a doozy for you today, Ray Dennis Steckler's 1971 (even though the title card says 1980) horror rodeo Blood Shack. 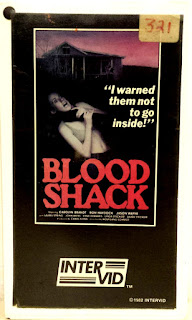 “There is a legend about this valley. A tale carried across the winds of time. A legend strange and sinister. The legend of The Chooper.”

This movie. Whoa. Just. Whoa. I don't even know where to start, so I guess the beginning is as good a place as any. Blood Shack opens with a car that looks like it drove right out of a twenties gangster film pulling up to an old ranch. The girl insists she's gonna stay in the haunted shack, so her two friends fuck off and leave her there. The trusty caretaker Daniel (Jason Wayne) then comes over to give her the whole “The Chooper's gonna get you” spiel.

She takes no notice and stays the night, overstepping that line between brave and stupid. She promptly gets offed by a screaming assailant awkwardly brandishing a sword. At least, I think so, it was very dark. It actually reminded me of my first grainy VHS viewing of The Texas Chainsaw Massacre where the night scenes were pretty much unintelligible. I guess that's why every other Chooper attack happens in daylight.

Seriously, could someone teach him how to use that?

Contrary to that little gem above though, Blood Shack is mostly just a combination of footage from a rodeo and two little girls playing around on set. Although, I do have to admit there is something adorable about watching a five-year-old relay exposition in child speak. I can't imagine it would have made any more sense coming from an adult. And oh my God, the narration. There are films that use this device as a crutch; and then there's Blood Shack. Steckler even found the need to narrate scenes that were completely unnecessary. For instance; 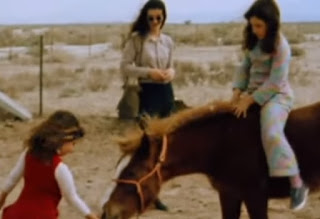 “Peanuts. That's what they named the pony. She was just about the prettiest thing you ever saw. If ever you wanted to see two happy kids this was it. Sugarplum, their adopted puppy, seemed to like their new friend. Margie took to riding Peanuts almost immediately. These kids really know how to enjoy life in the–” WHAT THE FUCK AM I WATCHING RIGHT NOW?!

Narration even ends the piece.

“So-and-so's dead. I don't know what I'm going to do. I think I'll just worry about it tomorrow. If tomorrow ever comes.” THE END

This came as a surprise to me because it hadn't even reached the hour mark by this point. I was, of course, grateful in that it was like the last day of school when your teacher let you out early, but what the fuck?

After viewing this, I turned to Imdb and it offered so much clarity. Blood Shack was apparently shot on short ends, which explains the string of one take wonders that involve cowboy hats getting blown off actor's while delivering dialogue and floundering fisticuffs. Oh, and they only had two lights. That explains the darkness of the first kill scene.

I discovered Steckler also gave us the infamous The Hollywood Strangler Meets The Skid Row Slasher. Then it all made sense. Steckler just loves narration, as that aforementioned movie doesn't have one spoken word of dialogue in it.

Perhaps the craziest thing about Blood Shack was that to sell it to drive-ins, Steckler had to add fifteen more minutes of rodeo footage to it. That works out to like, a third of the movie! Fuuuuuck me.

My crusty VHS wasn't helping, but this movie just looks like an antique. Apart from every car in the picture looking way older than when they shot this, even the score seems vintage. Most of it feels like it was plucked from one of those 16mm PSA's I used to watch in grade school, “Timmy, make sure you look both ways before you cross the street!”

So in closing, I can't really say this is even a movie in any real sense, but I also can't deny that I was entertained/fascinated. If only all bad movies were less than sixty minutes long.
Posted by Jay Clarke at 10:00 AM