Do You Have Your Card On You?

With digital distribution and online rental services, the brick and mortar stores are on their way out, but in the eighties and nineties, video membership cards were cluttering up wallets and purses everywhere. I have accumulated more than a few over the years, as I am sure you did, too. Back in the golden age of home video – which just happened to coincide with my formative years – taking a trip out to the video store was a special treat and as big a deal as visiting the arcade with a pocketful of quarters. I mean walking into these places was like entering that cave at the beginning of Raiders Of The Last Ark… minus the traps, of course. Who knew what treasures you were going to find in there?

The names of the first two stores my family used to frequent in the early eighties have long escaped me, but I still have flashes of remembrance. The first store was in the indoor mall that I would end up working in many years later. They had a huge Maniac poster by the entrance. Sadly, I was well into my twenties by the time I finally able to see that one. The suburban area I lived in seemed to be under some sort of ‘video nasty’ ban because certain titles like Maniac, Evil Dead and Last House disappeared for a great number of years while I was growing up. It wasn’t until I started venturing into Toronto that I was able to cross off some of those hard-to-find titles. This was long before Blue Underground and the many other distribution companies that thankfully made re-releasing those vintage titles a priority. The second store used to keep their movies behind glass like it was fine jewellery. I suppose that wasn’t far off, considering that back then a blank tape cost twenty-five bucks and the retail price of a movie was over a hundred. How times have changed!

The first video establishment that I could stake as my ‘home’ store was a place called Reel Fun. It was a short bike ride from my house and I burned a lot of time there in the mid-to-late eighties. Their horror selection didn’t take me too long to get through – I probably wore out their copy of Evil Dead 2 – but they also rented Atari 2600 games. In retrospect, I’m actually surprised they didn’t kick me out after all my incessant loitering.

Major Video became my favourite store quickly when it opened circa 1988 and eventually became my first place of employment and the home of The Horror Section. As an employee, we had unlimited rentals, which I abused like no man. I remember there was some grief from the manager about me renting restricted titles – my first week I basically had to sneak out a copy of The Cook, The Thief, His Wife and Her Lover – but I was able to smooth things out eventually. In her defense, she was just sticking to policy (I was sixteen) and The Cook does open with someone getting a plate of shit rubbed in their face. Ah, memories…

As plentiful as the selection was at Major, I did have other haunts. There was, of course, Jumbo Video. It had this whole separate room set up behind this whole castle wall façade, that I have spoken about before. Jumbo had goodies like Rats: Night Of Terror and Night Of A Thousand Cats. And free popcorn! It was also the place that ALMOST first supplied me with The Evil Dead… until I got it home and realized it was the Beta version. That didn’t go over well, let me tell you.

Then, there was Metro Video. This place was pretty shady. They did however, have some obscure titles like Intruder (which I would not realize was heavily cut until many years later), Junior and Terror On Tape, which made it worth the trip. If I remember rightly, Metro got shut down for renting bootleg copies a few years later.

As you can see from the card, Entertainment For You was pretty bare bones, a glorified convenience store to be honest, but it was the closest to my house and serviceable for last minute occasions.

Mammoth was another store that popped up in the mid-nineties. I didn’t go there often, but I do remember picking up episodes of this really cool UK horror anthology series called “Chiller”. You can also see that this was back when anime was still sometimes referred to as Japanimation.

Unfortunately, Major Video went into receivership in the summer of ’92 and was swallowed up by Blockbuster. It was all downhill from there. They even pulled their “family video store” bullshit right out of the gate, by giving the underage employees a hard time about renting restricted titles. It wasn’t a big deal for me as I was only a few months shy of the big 1-8 by that point, but that didn’t stop my co-workers from taking the piss and printing me off my own ‘special’ membership card, of course. 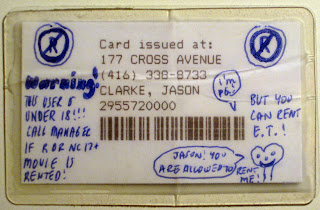 Rogers is ying to Cockbuster’s wang. I haven’t spent too much time in there over the years, mainly just rented a video game or two because they tended to have better rates. Though, these days, on the rare occasion I do have to go the brick and mortar route, I will opt for Red over Blue. And speaking of colours…

I’m not sure why “Scary” is blue. Wouldn’t black or red be more appropriate?

Highlander’s was a store that came and went pretty quickly a few years ago. They had this huge painted mural of Connor MacLeod on the wall. Highlander’s specialized in carrying early films of Hollywood stars, like Sandra Bullock’s Fire On The Amazon, Russell Crowe’s Romper Stomper and Tom Hanks' He Knows You’re Alone. Sadly, their downfall was a really shitty location, hence the over explaining on the card.

And at long last. Queen Video! This is where the journey ends. It was literally like discovering a whole new world. They had so many titles I’d only read about in magazines and the Web and so many more I’d never even heard of. I always had to go with a list; otherwise I would just wander around entranced by the sheer volume of vids. They had so much stock in such a small space that the VHS sleeves were flattened down and you flipped through them like vinyl records. It was at Queen that I finally found Maniac, as well as countless others. I filled in the blanks of my Argento catalogue, including the (STILL somehow unreleased on DVD) final part of the animal trilogy Four Flies On Grey Velvet. You should have seen this copy. It was dubbed in English, but would randomly switch to French at points and had Japanese subtitles throughout. And yet, still, I loved it! Queen also had gobs of Asian cinema, which I ate up with a rather large spoon. The first time I ever saw Battle Royale… Hot damn, I was in love! Best opening EVAR!!!

I’m getting off track here, but let’s just say that the fourty-five minute drive to rent a couple of movies was worth it every time. I also don’t want to leave out Suspect Video either because they were very important in my cinephile development, as well. Alas, they used a password system, thus no card. That fateful day last February stung something awful. However, Suspect still lives on in the Markham St. location and the newly opened Eyesore Cinema. I visited there a few months ago and when I spied Noriko’s Dinner Table wedged in between Erotic Werewolf In London and Maid In Sweden, I knew the spirit of underground video was alive and well.

So, I hope you enjoyed this trip down memory lane as much as I did. Please feel free to snap a pic of any old cards you have lying around and send them to me. I’ll add them to the collection. Here’s to the sweet smell of newly laminated plastic.
Posted by Jay Clarke at 12:45 PM

Fantastic idea for a post... alas, all my old video cards are gone. My first college job was at the oddly named Carbonated Video. The name always bothered me and no one was ever able to adequately explain how the name came to be, but they had a great horror laserdisc collection, so they probably still rank as the favorite video store from my youth.

Great post, Jay. Did you not have a National Video down here? Before Jumbo Video came to Timmins, National was the biggest rental store in town, and was the first time I'd ever seen a multi-flavoured popcorn kiosque. I can't even remember when it shut down -- sometime in 1994?

National sounds vaguely familiar, there may have been one here Oakville way briefly, but I certainly didn't frequent it.

Bandito Video was another great store that had a decent horror section, and I'm pretty sure they were in Southern Ontario as well... but it was gone by the time Jumbo Video came into the picture.

Bandito? Pretty sure I've never heard of them... did the employees have to wear bandanas over their faces to protect their identities?