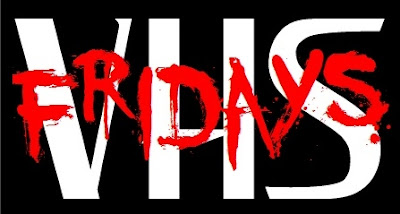 So here we are, the triumphant return of VHS Fridays. First tape off the top of the pile was Doug Jackson’s 1994 thriller The Paperboy. 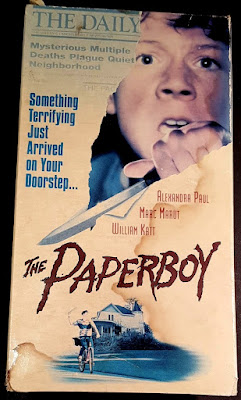 Weirdo twelve-year-old Johnny (Marc Marut) goes to increasingly homicidal lengths to make his neighbour Melissa (Alexandra Thorpe) his new mommy.
The Paperboy was watchable, but fairly mediocre fare. It had the air of a TV movie – it didn’t surprise me to see most of Jackson’s credits were in that medium – and sadly not as memorable as his two previous efforts that I recall from my video store days, Whispers & Deadbolt. And as far as vintage Cancon, it did not make me nearly as giddy as my revelatory viewing of The Kiss last fall.
That’s not to say that The Paperboy doesn’t have its moments. It escalated immediately with an old lady being plastic bagged quicker than Lynne Griffin in Black Christmas. and did chuckle during the Mr. Furley moment when Melissa overhears Johnny playing with her daughter...

And perhaps most impressive was that he was able to order a doll from the mid-nineties version of the Web and have it delivered the next day!
Marut did a decent job playing the piece-of-shit kid. His tantrums were wince inducing, and I suppose that was the point. I was a bit confused about his plan though. It was unclear at times about whether he wanted a mother or a girlfriend. If it really was the former – and he wasn’t so impulsive and unhinged – he could have just gone the easy route and tried to set up his lonely father with her. There you go, bonkers Brady Bunch complete! But that seemingly inflammable William Katt had to swoop in and ruin EVERYTHING!
I was happy to see Frances Bay show up, but when I saw her carrying Chekhov's inhaler I sadly knew she’d die in the third act. I think my only strain on believability - apart from someone actually screaming Ow! as they got knocked out – was that Melissa would put up with Johnny's antics for so long. Sure, she’s a teacher with the patience of a saint, but it was stretched to the extreme. The second she found out Johnny killed her mother she should have been beating his ass Naomi Watts/Vera Farmiga I’m-not-your-fucking-mommy style.

The Paperboy doesn’t possess the darkness of Mikey – which Imdb says this was a remake of not two years later??? – nor the polish of The Good Son, but as far as killer kid movies go, you could do worse.
Posted by Jay Clarke at 8:00 AM