I had intended to do Killer Workout for K, but while I was at an event at The Revue this week, I saw a trailer for this eighties movie called The Kiss. I had a vague recollection of the coverbox, but certainly knew nothing of it so I took a chance. 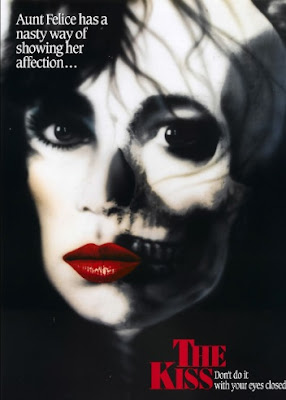 After the death of her mother, Amy's (Meredith Salenger) long lost Aunt Felice (Joanna Pacula) shows up and begins to infiltrate her and her father's lives.

The Kiss kind of fucking rules. It is a weird hybrid between a sexual thriller (this is was the period between Fatal Attraction and Basic Instinct where that shit was fire) and a supernatural horror. When I find a random movie like this, I'm happy if there are one or two moments I can latch onto, but this was a picture that kept on giving.

Let's start with the effects, which were abundant. Like shockingly so. Felice's powers off many people in Final Destination-esque ways. You remember that urban legend about getting sucked into an escalator? Well, this is the first movie (I've seen anyway) that actually visualized that. Also, our witchy antagonist has a familiar, a delightful cat puppet that could be bros with the one in Uninvited. Both 1988, what a year!

The cast is good, peppered with Canadian actors like Mimi Kuzyk and Peter Dvorsky - the guy with the “hand” grenade in Videodrome, but what blew my mind was that Terry, the dude bro who keeps losing his ear stud was Shawn Levy. Yes, Deadpool and just fucking slayed with season four of Stranger Things Shawn Levy. I wonder if Ryan Reynolds busts his balls about this movie on a daily basis.

Continuing with the revelations, as I said, this film was shot in Canada, Montreal to be specific. I can't believe this movie isn't talked about more by our brethren. I could go on for a while about this movie - Chekhov's hedge trimmer, the weird incestuous allusions, the musical sting lifted from Carpenter's Prince of Darkness and the climax where our heroine struggles to get out of the pool when there is a ladder LITERALLY two feet to the left - 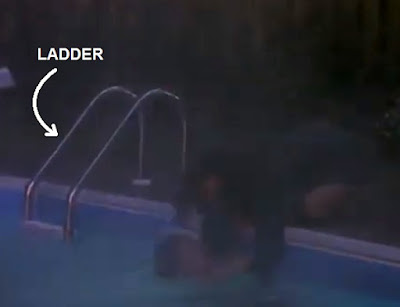 - but I feel you should really experience this for yourself. This is a great movie night movie. While The Kiss might not have the clout of something like The Hand That Rocks The Cradle, it's still fucking bonkers and deserves to be seen.