Going back in time today to a film I haven't seen in almost four decades, Sidney J. Furie's The Entity. 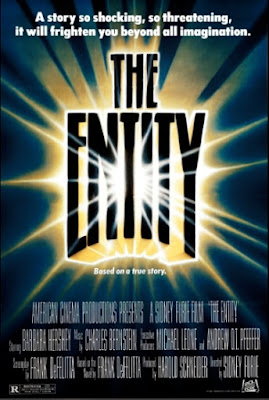 I'd been meaning to give this a re-watch for ages, as I feel it needs a re-evaluation. It was maligned at the time of its release with people flocking to the more digestible scares of Poltergeist that same year - much like E.T. overshadowed The Thing. Now I'm able to see this through adult(?) eyes and be fully aware of the thematic weight that went over my ten-year-old head.

The Entity is a solid thriller, then and now. Though it does have the air of a TV movie at times there are several things that elevate it, the powerful performance of Hershey chief among them. It was an emotional and physical role and she committed to it every bit as much as Linda Blair in the similarly structured The Exorcist. Actually, I'd say Hershey had double duty in this as mother AND victim. She played both the Blair and Ellen Burstyn's parts.

Next, there is that unforgettable score by Charles Bernstein. Those rape scenes are horrific by themselves, but when you put that pulsating noise over it, it's really well... assaulting, there's no other way to put it. The sound design overall is on point, as the lightning effects and breaking windows were blasting in my headphones.

Then there are the effects by legend Stan Winston and James Kagel. As an adult, I know how they did those spectral groping scenes, but it's still pretty impressive and the memory of how that blew my mind as a kid will never leave me. It's funny how the brain works, as my recollection of the frozen outline of the Entity was more jagged (like the Fortress of Solitude) but in reality it was more rounded and blobby.

This movie was based on a real case in the seventies. It's strange that you don't hear more about this kind of thing. Or I guess maybe it has evolved into what we now call sleep paralysis. It's pretty Goddamn spooky though and I imagine there were scores of women sleeping with the lights on in the winter of 1982.