Q's beyond The Winged Serpent and Quatemass are not abundant so I had to dig deep. Fortunately, due to Shudder's fairly large Euro-horror catalogue, I was able to pull this one out. 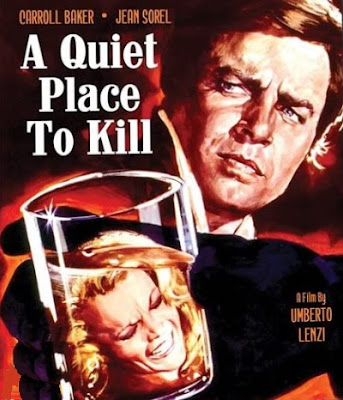 After recovering from a injury while racing, Helen (Carroll Baker) accepts an invitation to visit her ex-husband Maurice (Jean Sorel) in Majorca, only to be sucked into a murder plot.

This was my first giallo for Alphabet Slop and I'd almost forgotten how much fun they are. Everything is just amped up. The music is boppier, the locales are prettier, the clothes are flashier, and the women, hoo boy, the women are nuder. Now, I wouldn't call QP2K a horror persay, truth be told it's really only gialli adjacent - it has more in common with Diabolique than it does Deep Red - but with more treacherous seaside driving. Seriously that dash-cam made me very uncomfortable.

Cinephiles often equate director Umberto Lenzi with his cannibal films, but he was a very versatile director. Seven Bloodstained Orchids is an underseen gem and Nightmare City is terrific schlock. I talked about the endless superfluous dialogue scenes that sucked the life out of Open House. Well, QP2K has those same scenes, except Lenzi knows how to make them sing. He'll show some skin, have two men play chess who very clearly have NO IDEA how to play chess, or ahem.. .murder some pigeons. It is Lenzi, after all...

Yes, let's shock zoom over to the ladies. Lenzi mainstay Baker was stunning and rocked a mean leather jacket. Her rivals Anna Proclemer & Marina Coffa were no slouches either. I was surprised to see Coffa had little work after this movie because she had real presence and reminded me of someone I couldn't put my finger on. Margot Kidder? Jen Connolly?

Anyway, this was a good bit of fun from Lenzi's catlalogue and I can see myself checking out the other two films in this apparent trilogy - Paranoia & So Sweet, So Perverse - at some point in the future.