I've decided to switch it up this time and talk about something brand spanking new, Joseph & Vanessa Winter's found footage horror, Deadstream. 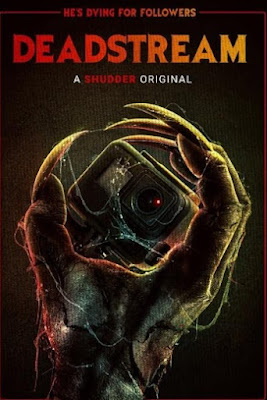 Disgraced YouTuber Shawn (co-director Joseph Winter) decides to hold his comeback livestream in the most haunted house in America. It does not go well.

This was a film that I missed while I was at Fantasia, but everyone who saw it said it was a blast, though there was some question about whether it would be as enjoyable outside of festival screening environment. However, after seeing the Winters' segment in V/H/S/99 at Midnight Madness, I was confident it would still slay in my living room. I was correct, Deadstream is wicked fun.

It had a very good setup, introducing us to an all-too-familiar YouTube-style personality who is a borderline d-bag, but at least not a total garbage human like the protagonist in last year's Dashcam. Shawn is genuinely witty and I was enjoying myself even before the shit hits the fan.

Deadstream also wades through a lot of the usual found footage pitfalls quite adroitly, by not only using the character's fame and ego to keep him at the scene and filming now matter how bad things get, but also using his viewer comments to cleverly convey exposition. The Winters' also have a solid grasp of escalation, in that just when you think it is nearing its conclusion, it still has gas in the tank.

Much like V/H/S/99, the antagonists are abundant and well conceived and the gore is really well done. I find well executed set pieces in found footage extra impressive because of the heightened difficulty of timing. I also of course got a kick out of the Evil Dead nods - or I guess because this was POV, Resident Evil 7?

Deadstream is perfect October viewing and the Winters' have now fully staked their claim as exciting new voices in horror.