When Lisa Langlois was at Horror-rama, she talked about this film and I was reminded that I had never actually seen it. So I dug deep into “the pile” and pulled out the DVD with that instantly recognizable cover art. 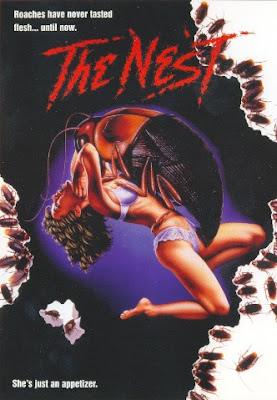 The Nest was a typical Roger Corman joint. This Piranha template (which was lifted from Jaws, the granddaddy of all animal attack pictures) was utilized many times over his career from Up From The Depths to Humanoids From the Deep. Speaking of the latter, I'm pretty sure that truck driving off the bridge scene in The Nest was lifted from HFTD. Oh well, I guess at least the lead actresses should be thankful the cockroaches weren't as amourous as the the cover would have you believe.

The first half of the movie is pretty standard, as we see roach-POV shots chomping their way up from cats & dogs to people. We get introduced to the characters, some of which are garbage humans like Dr. Hubbard (Terri Treas) who wasted no time announcing themselves as the villain. Oh sure, she'll say her misdeeds are in the name of science, but this chick is clearly a masochist. Or is a sadist? I get them mixed up. Langlois has talked at length about her bad experiences filming this picture, but she does her job like a pro.

To be honest, this movie doesn't get good until the third act, when all the gnarly creature effects appear. Though there are no giant cockroaches, there are some pretty awesome hybrids, including a cat and the Queen, which gave me Blair-Thing vibes. Cockroaches are gross to be sure, but the hybrid effects here by James Navarra are truly top notch.

Overall, The Nest didn't knock my socks off, but I'm glad I can cross it off the list.