R is for The Rats Are Coming! The Werewolves Are Here (1972)

This was one that's title was infamous and I just happened to have the Midnight Video VHS in my collection. It's been gathering dust since I acquired it many years ago at a Rue Morgue flea market. So now seemed an appropriate time to check it out. 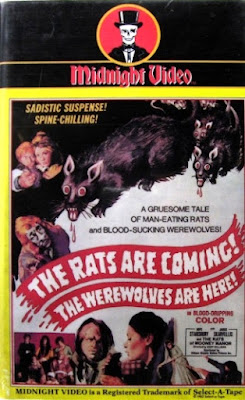 Diana (Jackie Skarvellis) brings her new husband home to her family estate with the intent of putting an end to an ancient curse that has plagued them for generations.

WHAT EVEN IS THIS?! I was immediately confounded by what I was watching. It was kind of like a play because everyone was orating as if they were trying to reach the cheap seats... or more likely the production's one mic. It was like Coronation Street, but with curses and werewolves. Really. Shitty. Werewolves.

I took a gamble on this one and I lost my puffy sleeved shirt. Everything about The Rats Are Coming! The Werewolves Are Here! feels cobbled together. If I had done my research on the director Andy Milligan, I would have known this was his MO. This movie (the original version of it anyway) was shot back-to-back with three of his other pictures and the producer had to step in and add the rats in reshoots to pad out the running time.

Yeah those rats Came alright! And then got immediately returned to the store. I'm told that the rat storyline was added to capitalize on the success of Willard. Though I could've guessed that when one of the characters literally named the rats Ben and Willard. Subtle, guys. Regardless, this movie needed more rats and less, well, whatever this was. A family of werewolves named the Moonies? Jesus wept.

This would have been the perfect movie to snooze through, but my brain was fascinated by the proceedings. Every actor was giving it their all, from Hope Stansbury doing her best Spiderbaby impression to Milligan himself doing double duty as a rat merchant and gunsmith. No one eats up the clock quite like he does. This movie was inept, yet somehow methodical.

The Rats are Coming... is unquantifiable trash, and yet still more engaging than Open House.