Okay, back to the oldies. I'm wasn't going to subject myself to anymore Jeepers Creepers movies just on general principle and I've already written about Jack-O - don't worry I know that was the obvious choice - so I took a look at horror movies that start with J and came up with... 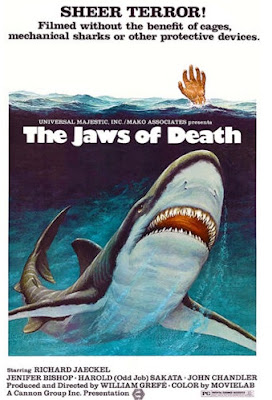 Sonny (Richard Jaeckel), a man who has a telepathic link with sharks is on a mission to protect his friends from those who would do them harm.
Guys... GUYS! This movie exists. Someone wrote this movie (apparently before Jaws came out and was greenlit after the success of Spielberg's juggernaut) and showed it to people. I was in literal awe for most of this movie. I mean, it's like one of the characters says of the protagonist, “you're crazy, but crazy in a good sort of way”.
Where do I start? I guess the lead is as good a place as any. Jaeckel, who looked immediately familiar, was in a million things for decades and seemed to especially like working with animals as he was also in Grizzly and Day of the Animals around this time. I mean shit, his last name is practically an animal. He plays this role completely straight, like has entire conversations with sharks that don't talk back (audibly anyway) straight, and walks around with an “aw shucks” look on his face most of the time.

Apart from Jaeckel, there is a colourful cast of supporting characters. Harold Sakata shows up as surprise! - a henchman. No word of a lie he's billed as Harold “Odd Job ” Sakata.  Buffy Dee plays a bar owner who might as well be Boss Hog as he letches his way through every scene. I love the bit where he bitches that no one is watching the swimming girl (Jen Bishop) he paid so much money for and LITERALLY everyone in the bar is watching her.
If I can give some props here, there is a lot of interacting with sharks (even if they are Makos which aren't the most intimidating out there) some sequences of which had me screaming “are you out of your mind?” at the stunt performers. More importantly, this was an American production (read NOT Italian) that at least made me think that some of these sharks lived happily ever after. Anyway, good underwater photography. 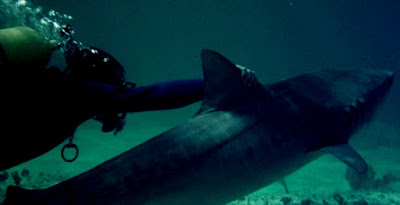 So, bonkers movie that I can't believe ever saw the light of day. It's a hoot and took me by surprise a bit. I was expecting greasy exploitation in the vein of Great White or Tintorera, but instead I got a veritable origin story of The Deep, except if he was a decent guy and not a D-bag rapist. Man, the seventies were a trip.
Oh, and R.I.P. Matilda.
Posted by Jay Clarke at 8:00 AM