Thanks to a kind message from Mermaid Heather, I recently discovered that this movie was actually the sixth adaptation of James Herbert's bibliography. Given that his works are so infrequently mined, I felt compelled to watch and as luck would have it I had a free letter. 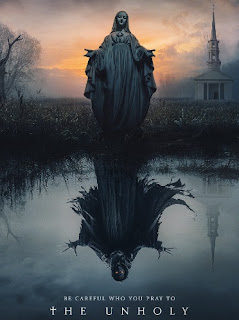 Alice (Cricket Brown) gains the power to heal and says the Virgin Mary is speaking through her. With the help of tabloid journalist Gerry Fenn (Jeffrey Dean Morgan), she spreads her word. Or is it?

There was some terrific pedigree here. Herbert's source material (his 1983 book Shrine), produced by Sam Raimi and some top level character actors the likes of Morgan, Bill Sadler and Katie Aselton. However, like I mentioned yesterday, the Hollywood system can't seem break out of its same old tricks. Having just watched Terrified before this, the difference between a filmmaker who knows what he's doing and one who doesn't is made abundantly clear. Evan Spiliotopoulos is definitely a better writer than he is a director.

A scary movie is more than just easy jump scares and CGI apparitions. For instance, the first scene of The Unholy is basically the first scene of Bava's 1960 film Black Sunday except shot in first person. One scene is effective, the other is not. I bet you can guess which one. And don't get me started on its penchant for exposition and over explanation. Restraint could've really helped this movie.

It's a shame because as far as I can remember (it has been a few decades), this was a fairly pure adaptation of Herbert's book. Sure, there was the usual condensing of characters and updating to modern day, but it hit all the beats and the casting was great. I thought the exchanges between Alice and Gerry were sincere, and few things bring me more joy than watching Cary Elwes do an accent (any American Crime fans in the house??). Problem is every time the solid cast built up some momentum - CG FACE FLY AT SCREEN! I wonder if that's actually what it said in the script?

Seeing Herbert onscreen is always a happy day, but I'm thankful the cast was skilled enough to keep it - despite post production's worst efforts - from being a painful disaster. I wonder if the studio system is ever going to break out of these old habits...