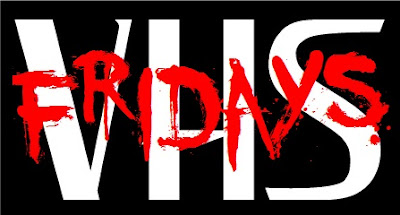 Back in 2013, you may recall me gushing over an American indie called Found. For those who haven't seen it, the film features snippets of a fake horror film called Headless that spurs on one of the characters murderous appetites. Shortly after, the crew on Found decided to dig in and make a feature length version of Headless. I was naturally interested, and recently Mermaid Heather – God bless her – was kind enough to send me a DVD of the film.

Also, just to acknowledge it, I'm aware that Headless is not technically a VHS, but the movie is meant to be a forgotten Video Nasty from 1978, so I'm running with it. 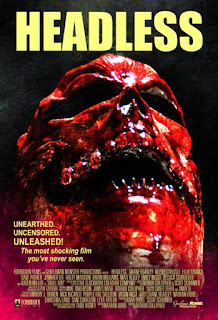 A masked maniac (Shane Beasley) terrorizes the Midwest, abducting & killing young women for his psycho-sexual pleasures. Who will be next?

So, to quote the coverbox of Juan Piquer Simón's Pieces, “this is exactly what you think it is.” The caliber of gore is top notch and every bit as splattery as the parts eyed (see what I did there?) in Found. The filmmakers decided to load all the original footage in the credit sequence and film all new footage for the actual movie. It turned out even more nihilistic this time around, lulling me into a false sense of security about how things were going to play out. 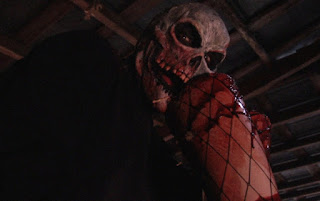 Boy, do these guys ever have the aesthetic down. Not only does Indiana once again prove itself a veritable treasure trove of locations (a roller rink! Who knew those even still existed?), but there's also apparently an abundance of seventies vehicles still kicking around, as well. I was really impressed just how closely this resembled the old shot-on-video fare of the early eighties. Except the acting was better, and the camerawork, and.. well pretty much everything. I felt that director Arthur Cullipher & company were actually trying to create something here, not just make a buck. Like Found before it, there were visual homages throughout Headless, as well. While its predecessor showed them through the VHS and posters that adourned Marty & Steve's bedroom, Headless used visual cues that ranged from the obvious, like Halloween and Nightmare on Elm Street, to the more obscure like The Town That Dreaded Sundown and Tourist Trap.

Despite all that though, I came away feeling a little cold at the end. Most of the reasons I really connected with Found were absent here, so what I was left with was a string of really gory kills. I would never complain about that, but it wasn't Found. You know? However, what you do have is a much better version of infamous titles like 555 and Spine, minus the detective subplots, which you can be damned sure I was thankful for. In its place are some really natural performances by would-be-victims Kelsey Carlisle & Ellie Church, and genuinely creepy imagery involving a skull-faced boy and a no-faced lady. 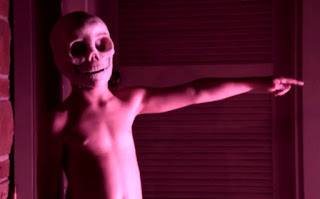 The stripped bare narrative and extreme gore will no doubt narrow its appeal, but I think that Cullipher succeeded in what he set out to do, which was tear open a portal back to a grimy, blood streaked '78 where Headless could have existed.
Posted by Jay Clarke at 10:00 AM

I had a blast with this one. Haven't seen "Found" though, seems to me a little slow and psychological? Anyway, I'm keeping an eye on this guys.

You should definitely check out Found. It certainly doesn't skimp on the gore and I thought the story was more resonant, as well. Harvest Lake and Plank Face are really interesting ventures, as well.