Good morning everyone! It's crazy to think I'm three-quarters of the way to three hundred of these things, but the numbers don't lie. Here's what I've got for you this week.

I've spoken here many times about the 2013 movie Found. Now director Scott Schirmer has a new nightmare in the works, a sadistic abduction horror called The Bad Man. His Indiana-based filmmaking collective already has many pieces in place, but are also looking for your help to bring this devilish little piece to life.


Schirmer has a knack for pushing boundaries, so I bet there is more to this project than meets the eye. If The Bad Man looks like something you'd be interested in seeing, you can contribute by visiting the Kickstarter page here.

Here's a thing of grotesque beauty, it's the Arrow cover art for their upcoming Blu-ray release of Jörg Buttgereit’s 1991 flick Nekromantik 2. 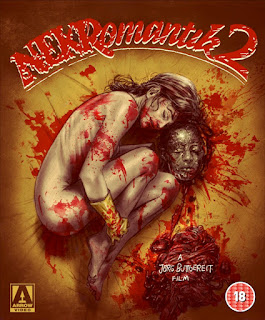 This run, releasing November 2nd, is limited to 3000 and has a slew of extras, including a commentary track, new interviews and a making of doc. The release also includes the soundtrack with a one-hundred page booklet. For more info, check out Arrow's site here.

A trailer came through my inbox this week for Canadian director Jon Knautz's newest effort, Goddess Of Love.


Being impressed by his debut Jack Brooks, and his under-appreciated gem of a follow-up The Shrine, I am very interested to see where he is at now. Goddess will premiere at London's FrightFest later this month and then at the prestigious genre festival Sitges in October.