The films screening at the twenty-eighth edition of TIFF's Midnight Madness programme have been announced. Usually, I'd throw up posters, but some of them are so new, they don't even have Imdb listings yet.


However, we do have some returning directors this year, including Sean (The Loved Ones) Bryne with Devil's Candy and Joe (Almost Human) Begos with The Mind's Eye. Hopping over from the Vanguard programme is Jeremy (Blue Ruin) Saulnier with his new thriller Green Room. Japanese icon Takeshi Miike returns to midnight for the umpteenth time with Yakuza Apocalypse. Word on the street is that Miike may actually make an appearance this year for the first time since 2000.


Adding to the list of promising anthologies out there is Southbound, featuring the talents of David (V/H/S) Bruckner and Radio Silence.


There are also two titles that were birthed from short films at this year's fest. Ilya Naishuller's Go-Pro lensed actioner has now morphed into Hardcore, and the Turkish horror Baskin has opened its window into hell even further. 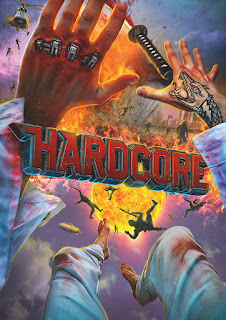 Closing out the programme will be Todd Strauss-Schulson's SXSW hit The Final Girls.


This is a pretty promising lineup and looks to carry forward the momentum built from some strong titles last year. See you in September!
Posted by Jay Clarke at 10:30 AM