While I was reading the recently released book, Satanic Panic: Pop-Cultural Paranoia in the 1980's, I saw mention of the 1983 flick Skullduggery in the chapter covering the religious backlash against Dungeons & Dragons. I remembered the cover box from back in the day... 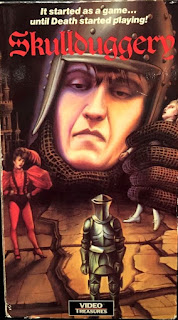 ...but up to now I didn't realize that a) it was a Canadian production and b) that D&D - or a poor facsimile thereof - was featured in the plot. I was not able to locate a trailer, but I did find a number of scenes online.


This movie... Well, I don't even know. This isn't some of the Toronto film industry's best work, let's just say that. These scenes below should give you some indication as to what we're dealing with here.


I realize those scenes are taken out of context, but I spent most of my time while viewing them muttering “what the fuck is going on?” That is when my mouth wasn't just hanging open in utter confusion. I mean, JESUS, at least Mazes & Monsters had a coherent narrative.


But I digress. We're out of the dark ages now, and millions of people around the world now play role-playing games in some capacity. If they were indeed part of some master plan orchestrated by Old Scratch, then let me be the first to say, “well played, Sir,”
Posted by Jay Clarke at 10:00 AM