Rue Morgue TV's latest episode of The Rewind Zone reminded me I still had a copy of James Bryan's 1981 slasher Don't Go In The Woods sitting un-watched in my stacks. Frankly, a summertime slasher sounds like a wonderful contrast to the subzero bullshit that has descended upon Ontario in the last week or so. 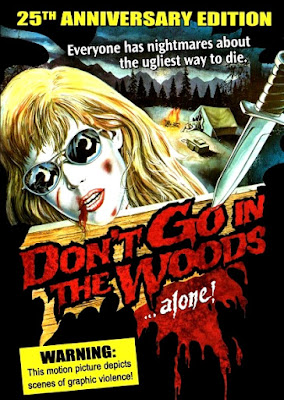 A maniac kills people who venture into the wood-- Do I even need to synopsize this?

Not even ten minutes in, I could tell Don't Go In The Woods was a real turkey. However, there's something intriguing in that it's not immediately apparent whether it's meant to be a horror movie or a parody of a horror movie. It is decidedly the latter – especially when you factor in all the comical sound cues – which I guess makes it ahead of its time. It would have just been a (more) terrible Friday the 13th ripoff if it was played completely straight.

Don't Go In The Woods was a movie of thirds. Opening the movie was a series of vignettes that saw random hikers and campers being murdered, mostly offscreen, by an unknown force mixed in with the travels of our four comically dubbed leads. My favourite part was when the group leader told his crew to “watch out for rabies”, as if it's like poison ivy or something. I also have to mention that this may be the only movie where someone tells a campfire tale and the camera never goes to the storyteller. Imdb reports that they lost that footage so they had to use the reaction shot. Ohhh, that's so Don't Go In The Woods!

The best chunk of this movie was the middle, where it got much gorier and the killer was actually revealed. Known only as The Maniac, this wild bear dude looked like a crazed Grizzly Adams and sounded like a feral Yoda. Most of the best set pieces were in this section, including the couple – they literally had three seconds of screen time before they were attacked – that were killed inside their sleeping bags. Bryan may have ripped off Friday 1, but he beat Part 7 to the whole sleeping bag bludgeoning thing at least. I also have to mention that the scariest thing in Don't Go In The Woods to me was this woman's nose...

Then sadly, the third act slammed on the brakes. I imagine it was in the interest of padding things out, but it largely consisted of people, namely the sheriff, just searching the forest. Although, I have to admit that this movie was brutally committed to its body count (16!). Even an hour in, they were still introducing fodder, like that poor wheelchair guy. Damn, 1981 was not a good cinematic year for the disabled.

I'm willing to give Don't Go In The Woods its good-bad street cred, but when it comes to legit backwoods slashers I'm gonna lean more toward Rituals or Just Before Dawn. That end song was pretty ace though.