Technically I will be cheating, as I do not actually own Brent McCormick's 1986 gore flick The Abomination on VHS. Actually getting my hands on this item are pretty remote, so this time around, YouTube will have to suffice. 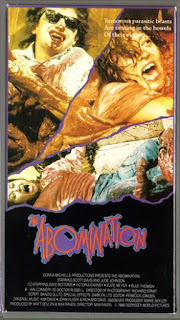 A tumor coughed up by his mother, infects Cody (Scott Davis) and wills him to fetch it victims in order for it to grow and reproduce.

Yes, this movie is pretty fucking rough. Shot on Super 8 in Texas, there is barely a movie here. In between the terrible dubbing, padded out scenes of car rides and stock footage of horses – at least Blood Shack went to a rodeo! - it's pretty shocking how little happens here. I mean, they actually replay the opening sequence in its entirely towards the end of the movie, for fuck's sake. 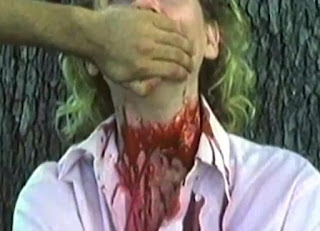 The Abomination was somewhat salvaged – and likely the only reason anyone knows about this movie at all – by its gore effects, but they're still nowhere near the caliber of the similarly creatured The Deadly Spawn which runs rings around this in every way possible. It's funny though. I would have bet money that Frank Henenlotter's Brain Damage served as a major influence for McCormick, if not for the fact that movie wouldn't exist for another two years. 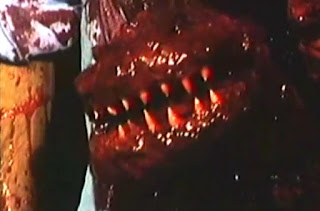 I did find the idea of the tumour becoming a tentacled beast that controls its hosts to feed it intriguing, but it's still only half a movie. Using an weird voice-over at the outset to explain away all the stuff that made no sense was not particularly satisfying either. At the end of the day, it's probably just as well I didn't find this VHS out in the wild, as I would have dropped an ungodly amount of money for a serious case of buyer's remorse.
Posted by Jay Clarke at 10:00 AM