I checked out a great little event at the Revue Cinema earlier this week. As part of their Food In Film series curated by cinephile/pastry chef Cora James, there was a screening of Larry Cohen's classic 1985 flick The Stuff. 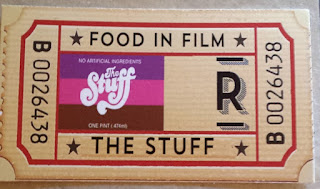 The food paired up with the movie was some tasty gelato served up by Queen West eatery Death In Venice. I'd never actually had gelato before, and this special blend of grapefruit, tonka bean & mint was pretty tasty. Like I couldn't stop eating it. Maybe they were right to put up this disclaimer. 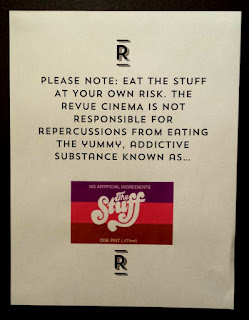 Although I didn't go much on James' assertion that The Stuff is a bad movie that gained a cult following and due to their inherent greed Michael Moriarty & Garrett Morris' characters were in fact also villains, she did share some interesting pieces of trivia during her intro. Did you know that Patrick Dempsey and Mira Sorvino both have uncredited appearances?

I, of course, think this movie is terrific and lament the fact that people don't (and likely can't) make them like this anymore. The Stuff is a somehow comedy, horror and satire all at once. Aside from the comment of blind consumerism, it was also hard for me to see Paul Sorvino get on the airwaves toward the end of the film and not think of Alex Jones.


It was an awesome screening that I left with my belly full and my spirits high. Long Live Larry!
Posted by Jay Clarke at 10:00 AM