I knocked off another title from my giallo deck this week in Sergio Martino's Next Victim starring Edwige Fenech. 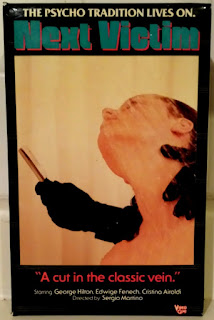 Like most giallos, this film was retitled for different markets with names like Blade of the Ripper, Next! and The Strange Vice of Mrs. Wardh, all I suspect with varying levels of censorship if my severely cropped VHS copy was any indication. It's okay, I fled to YouTube after to see what I missed.


The movie itself is a bit of an oddball. It almost seemed like a relationship drama with a slasher going on behind the scenes. And considering Martino's work to come like Torso two years later, the kill scenes were downright restrained. I also feel like this movie was very similar to at least a few of Martino's other projects. It's been a while since I've seen Your Vice Is a Locked Room and Only I Have the Key, but I'm pretty sure it shared a lot of the same beats. 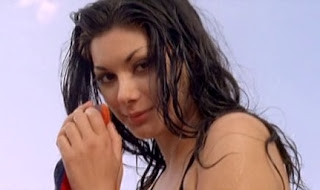 Fenech is as always a vision to behold. There are very few actresses that hypnotize me like she does when she's onscreen, but you've heard me prattle on at length about this before. Her character's “blood fetish” wasn't really well articulated and apart from cringe-inducing scene where she has sex amid shards of broken glass, it's rarely touched upon.


As is often the case with these pictures, the scenery in this was particularly breathtaking. Martino used the locales of Austria and Spain to the fullest. I mean, how the fuck does THIS park even exist in the world???

Next Victim wouldn't be in the top list of giallos, or even ones from Martino for that matter, but it still has a lot of stuff that I love about this genre -- beautiful locales, lovely ladies and snappy dialogue that is often inappropriate by today's standards. Have a great weekend, kiddies!
Posted by Jay Clarke at 10:00 AM