It has taken me a week to let things percolate and now that this year's TIFF is behind me, here's what I thought of David Gordon Green's interpretation of the Halloween mythos. 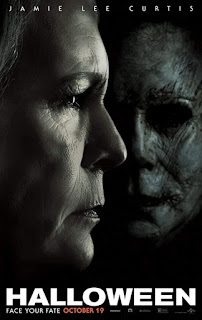 Set forty years after the events of the first film, a re-incarcerated Michael Myers escapes to Haddonfield to finish what he started. In the meantime, Laurie (Jamie Lee Curtis) has sacrificed living a normal life with her daughter (Judy Greer) and granddaughter (Andi Matichak) in order to prepare for his inevitable return.

First I'd like to say that evening spent at the Elgin was a one-of-a-kind experience that I wouldn't trade for anything. As cliché as it sounds, there was a palpable energy in the air, as everyone awaited the first first few bars of horror's greatest piece of music.


I wanted to love Halloween 2018, and there a plenty of people online doing that – I'm glad they are excited – but I had some issues that kept me from being one of them. This film felt very disjointed to me, like it was originally a longer movie and was subsequently cut down. I obviously have no proof of this, but when characters are dropped without warning – and by dropped I don't mean offed by Myers, I mean they just literally disappear – I have to wonder if something got lost in the edit. 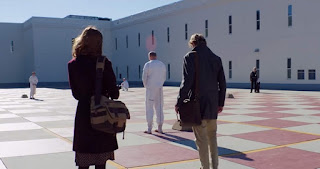 For me, this caused an identity crisis within the film that certainly did not speak to a singular vision. I saw Gordon & Danny McBride's voice, but I also saw the Blumhouse stamp, as well. Most of the time, they worked in tandem, but sometimes also at odds. When it was neither, Halloween 2018 cherry picked the best bits from other installments, sequences from the first sequel, H20's motif and the high body counts from the entries of the late eighties. I can't really fault them for the latter though, as I feel like they were making up for what they couldn't get away with then.

I think the fundamental problem was that the heart of the picture should have been Laurie vs. Michael, that is what made H20 – despite all its production foibles – successful, but here this theme got bogged down in its ensemble. Laurie barely felt like a main character until the third act and the super-intriguing thread of three generations coming together to destroy their inherited evil didn't feel earned until the movie's final moments. For instance, I cared more about the babysitter character than I did Laurie's actual granddaughter and that's troublesome.

All that said, I by no means think Halloween 2018 was a bad movie, as there were a ton of solid set pieces that went way beyond simple homage – the Halloween II-esque tracking shot from the trailer notwithstanding. I really liked the physicality of Myers with the original Shape Nick Castle doing double duty with James Jude Courtney. And as one would assume, the music provided by Carpenter and his son, Cody was superb and included several new movements with Myers' departure from Smith's Grove being a real highlight.

I've heard some rumblings about fans not being on board with the comedic undertones, but I wasn't bothered. There's always been room for that in the Halloween series and 2018 offered up one of the best lines since Bud's Amazing Grace serenade.

I have to admit that after Get Out, I was hoping this pair of outsiders would offer up something special. I hate the term “elevated genre” as much as any horrorphile, but I'd be lying if the seed wasn't planted leading up to the screening. Truthfully though, Halloween 2018 was just another sequel in a long line of redos and revisionism. I'd put it somewhere in the middle, miles above the maligned sequels and Zombie's canon, but it just didn't resonate with me like the first four & H20 do.

I feel like the Twitter love-fest isn't really doing the rest who have to wait a month any favours. Hype is good, but OVERhype can be a movie's worst enemy. My message would be not to expect anything more than an entertaining sequel revisiting two of your favourite horror avatars and you'll have some good fun in the dark.
Posted by Jay Clarke at 12:00 PM