Stand Rant Below aka TL/DR

As you may have noticed, reviews of horror media have been scarce over the last year. To be honest, it has been due to a lack of inspiration and not that I haven't been absorbing noteworthy content. Bly Manor and The Last of Us Part II were extremely treasured experiences for me last year, but I was not able to type through the funk that has hung over me for what seems like ages. Until now;

The Stand show recently finally became available to Canadians through Amazon Prime and the day after I finished on Mikey's shoot I binged it in one sitting. Before I get to that though, a little history.

Stephen King's The Stand was the first novel I ever read and still remains my favourite book. In my teenage years, it was essentially my bible and I could even recite some passages from memory. Decades later, even the smallest details (like Stu's Guinea pig roommate while in captivity was named Geraldo) are still rattling around in my brain. I haven't revisited the 1994 mini-series since my original watch, but I remember being lukewarm on it. It was a serviceable adaptation, but it just really felt sanitized for network television. Up to this point, I think the best representation was the comic series a decade back.

So now you may understand why I had to battle through and just put my thoughts of this newest adaptation to digital paper. Onward and upward!

First off, was I happy with Josh Boone's go at it? Overall, not really. So many odd choices constantly took away from my enjoyment of the show, but let me try and break it down.

In any adaptation, dealing with the changes to the source material is just a fact of life. However, what irks me is when said changes detract from the experience. Paramount of these for me was the disjointed structure. The Stand lends itself to a linear narrative, as it's all about character arcs. If a character's journey goes from A to Z, and you start at M unnecessarily, it affects it as a whole. Two examples of this are how Harold Lauder (Owen Teague) and Nick Andros (Henry Zaga) are treated in this series.

I think a huge misstep was making Harold the entry point in the story (and not James Marsden's Stu who is the obvious everyman – his name is literally RED MAN) and seemingly attempting to make him a sympathetic character. The whole invented bit about saving Frannie (Odessa Young) from suicide was another gaffe that encouraged the idea that she owed him something. This is not only annoying, but also a little tone deaf. Perhaps the bigger crime was the neutering of Nick's character. He was one of the book's main protagonists and his eventual sacrifice was one of its most shocking moments. Here, he was basically just given a few scenes and his death doesn't land because of it.

But it wasn't all bad, as strong casting choices were Stu, Fran, Glen (Greg Kinnear), Tom (Brad William Henke), Mother Abigail (though considering Whoopi Goldberg had been waiting thirty years to play this role I would hope so) and, for the most part, Larry (Jovan Adepo), although more on that last one in a bit. I first wanted to touch on the handling of the Captain Trips superflu itself. Making everything all take place over a shorter amount of time and have our character's introduced while the outbreak was happening around them was a smart choice – and a prophetic one considering those early days of Covid-19. Hamish Linklater's appearance as a renamed Dr. Ellis was the first time I thought “oh, things are looking up” during my watch through. And points for the King and Mick Garris cameos, they made me chuckle. 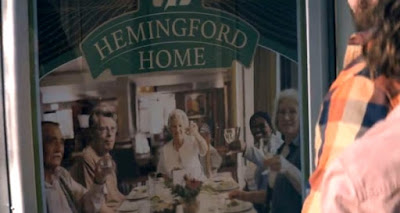 One of my favourite sections of the book is Larry's escape from New York, but this version glazed over a lot of that too. It started decently with him dealing with his dying mother and his conversation with the “Yankee yanker” – though he by no means should have been a replacement for the Monster-Shouter – but past his great first interaction with Rita Blakemoor (Heather Graham) it goes awry. When I visited NYC, I made sure to drive through the Lincoln Tunnel because that was how much that section of the book affected me. Presumably for budgetary reasons, this whole bit was replaced by regular old sewers. It was kind of like being sold Jason Takes Manhattan and getting Jason on a boat in Vancouver instead. Wait, what am I saying? Jason 8 is still great. This, not so much. Also, Rita's death was reduced to her lamenting in the rain, as opposed to the nightmare fuel of the book. 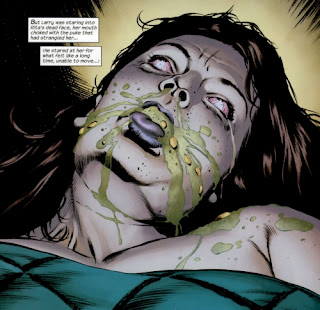 More tragic is the curtailing of Larry & Nadine's relationship. Forget the fact that their meeting was cut down to a ten-second flashback, it's that there isn't enough material to properly set up their last scene together in Boulder. I do want to preface this by saying that Amber Heard's portrayal of Nadine was one of my faves in this series and a lot of it was due to her actually being given a decent amount of screen time, just unfortunately not with Larry. The complete omission of Lucy Swann doesn't really give Larry any reason to not accept Nadine's advances. Sure, you could make a case that he had moved on and he did have something he needed to do right that second, but on the other hand, if Amber Heard is on your doorstep and ready to go...

That's enough about the Boulder Free Zone, let's move West to New Vegas and a whole new set of grievances. I was talking to a friend a few days before about the show and he had heard that people were saying Alex Skarsgård was miscast as Randall Flagg. I'd say he was the least of this show's problems and a damn-sight better than the mulleted Jamey “rub-a-dub-dub-thanks-for-the-grub” Sheridan from Garris' version. I actually thought the idea of Flagg taking power from the fear of his followers was one of the few interesting slants that this show posed.

I had more of an issue with some of the Dark Man's underlings. Nat Wolff's portrayal of Lloyd was far more flamboyant than necessary. I get the idea of someone being in over their head, but there needed to be a level of restraint (more like Miguel Ferrer's turn in the mini-series) as everyone else was off the charts, namely the actresses crushing as Julie Lawry and the gender swapped Rat-woman (Katharine McNamara and Fiona Dourif respectively). Though nothing was more cringe-worthy than the show's treatment of The Trashcan Man (Ezra Miller) who was essentially boiled down to a Gollum-like entity.

As for New Vegas itself, the higher production value made the landscape impressive and there were several scenes showing the debauchery of its citizens, but later occurrences flew in the face of this setup. These denizens were apparently okay with public crucifixions, but then horrified when Flagg beat Bobby Terry (Clifton Collins Jr.) to death and Lloyd executed Glen. You can't have it both ways, guys. I also wasn't real sweet on Nadine's exit either. Admittedly, the Hand of God climax was less clumsy than the mini-series, but I'm not sure we needed to see Flagg dance.

So, the story ended, but there was still one episode left. It turns out there's a new epilogue written by Stephen King for the show. I swear, you give him any opportunity and he'll just keep adding and adding. This last episode, which mainly features Stu and Fran going back to Maine, doesn't really need to be there, but I can appreciate wanting to give Fran her moment in the sun and an opportunity to interact with the Dark Man. I did like those scenes between them.

I think that's the meat and potatoes of it. I wanted to like this, but I think I'm just too married to the source material. As I said before, I'm okay with cutting out bits like The Kid (who I hear was originally supposed to be Marilyn Manson so excellent call in hindsight) and Ray Flowers, but when you interfere with the actual DNA of the story, you SCROOOOOOOWED IT UP!