Shortly after posting about the passing of Miguel Ferrer it dawned on me that I had never seen The Night Flier, the 1997 Stephen King adaptation in which he starred. With it having been a few weeks since my last VHS Friday, I went about rectifying that. 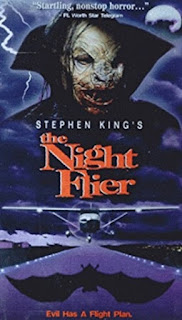 Tabloid reporter Richard Dees (Ferrer) becomes obsessed with a serial killer dubbed The Night Flier, but how far will he go to get the scoop on this mysterious figure?


The nineties were a Stephen King free-for-all with film and television bigwigs all falling over themselves to bring his works to the screen. Some stories were less than twenty pages long, but that didn't stop studios from putting out stuff like Graveyard Shift (1990), The Lawnmower Man (1992) and The Mangler (1995). The Night Flier, however, I would say was above average. It stays pretty faithful to the subject matter (more than I can say for Lawnmower Man) and the additions made to pad out the length - the original story was thirty-some pages - served the story well.

King aside, I was there to watch Ferrer and he did not disappoint, even managing to level up his sardonic asshole game in the one. He actually made his characters in RoboCop and Twin Peaks seem like gregarious pussycats by comparison. Dees was definitely one of the most unsympathetic characters I've seen in a while. I had to wonder if Dan Gilroy ever saw this movie because there are definite parallels between Dees and Gilroy's character Louis Bloom from 2014's Nightcrawler right down to specific scenes. It's unlikely, but Night Flier? Night Crawler? Who knows? 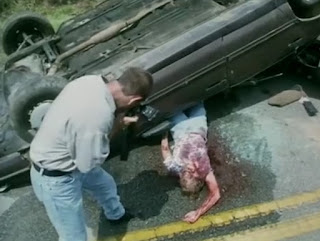 One of the things added to the script was a rival reporter played by Julie Entwistle. She had this doe-eyed look that reminded me of Phoebe Cates, but there was also a fierceness there, as well. I was actually shocked to find that The Night Flier was her only real credit because I thought she was really strong. I realize she was director Mark Pavia's wife, but I thought she was legitimately good in the role.

The make-up effects by KNB EFX were not only as solid as you would expect, but also quite plentiful with a climax features enough prosthetic work to rival that of a Walking Dead episode. I found the actual Night Flier design to be a little hokey, but it didn't help that all of Pavia's efforts to lead up to a big reveal were completely negated when the marketers decided to put him on the cover.


As far as Stephen King adaptations go, this is in the upper echelon, especially when factoring in how closely it keeps to the original material. It was just really good to see Ferrer front and center for once. He may have played some cantankerous characters, but God damn if he didn't command the screen.
Posted by Jay Clarke at 10:00 AM