A Return To Form.

M. Night Shayamalan is back this year with a new thriller, and because I find this guy's career choices endlessly fascinating, I knew I had to get out there and see Split opening weekend. 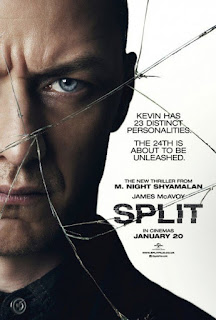 
I actually liked M. Night's last flick The Visit, so I was hoping Split would continue his positive streak. I'm very glad to say that not only did he succeed, but I'd go so far as to say that Split is his best film since 2000's Unbreakable. I found myself engaged by this film for two reasons, the first of which being the performances. The highlight was obviously McAvoy who effortlessly portrayed a dozen or so characters over the course of the film, but I was once again smitten with Anya Taylor-Joy as Casey. She is well on her way to becoming Hollywood's (or at least horror's) new “It” girl.

Secondly, I was really taken in by the lore of the film, the crux of which being that multiple personality disorder is not an affliction, but rather an evolution. I admit that where the film ultimately goes does initially require a bit of a leap, but I thought it was really well put together. It makes me think that M. Night might actually have it all figured out now.


He is an idea man, but he is also very good with character, namely character interaction. His stuff works when his characters are the meat of the picture, not the so-called “twist” endings we have grown to expect from him. It's the relationships between Bruce Willis & Haley Joel Osment in The Sixth Sense, Bruce Willis & Sam Jackson in Unbreakable and, before it shit the bed in the end, Mel Gibson & Joaquin Phoenix in Signs that really resonated with me as a viewer.

Split is all character interaction. Casey has discussions with Kevin's different personalities, as does his therapist, Dr. Fletcher (played with sharp intelligence by Betty Buckley). As the story played out, I began to realize there wasn't going to be a big twist. Things played out as you might expect (or at least hope) and it didn't end up that Casey was really the twenty-fourth personality, or that the personalities transferred to another host just before it cut to black.


So, there may have not been a twist, but there was, however, a big reveal via a MCU-style credits stinger. I won't spoil it here - it'll probably be all over the Internet by the time I post this - but that ending was brilliant and completely unexpected. It not only washed away any problems with the legitimacy of the twenty-fourth personality, but it also sort of time warped M. Night's career back to where he was at his peak. Well played, sir. All is forgiven.


Split is a solid thriller with terrific performances top to bottom and really makes me excited for where M. Night plans to go from here.
Posted by Jay Clarke at 10:00 AM