While I don't really have much interest in the new Ring movie that is coming out (last year's Sadako vs Kayako seemed like a nice exclamation point on both franchises) I did get a kick out the viral prank video they made for the release.


Samara also showed up on The Today Show by way of special delivery, as well. For those interested in the new flick, it releases this Friday.


I found about an upcoming project called My Favorite Thing Is Monsters this week. Created by single mother from Chicago named Emil Ferris, this part graphic novel, part fictional diary has captured high praise from those who have read it so far. 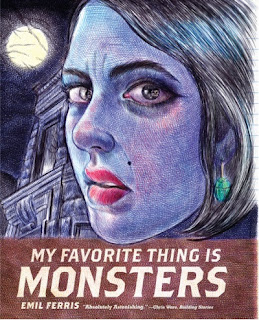 The story behind this piece is very intriguing, and I can't wait to check it out when the first part (of two) is released Feb 13th. For more info on My Favorite Thing Is Monsters, check out this Forbes article here.


Sadly, we lost another legend this week. Sir John Hurt passed away this week after a long battle with pancreatic cancer. He was 77. Hurt was a prolific actor with other two-hundred credits under him. He was a man who appeared in all manner of productions, but always added an air of legitimacy to any project when you saw his name in the credits.

For me, he will always be Kane, the ill-fated crew member of the Nostromo in Ridley Scott's 1979 film Alien. His death sequence still remains one of the most iconic scenes in movie (let alone horror) history. Almost as resonant with me was his voice work in the Richard Adams adaptations of Watership Down and The Plague Dogs.