The first film I watched at this year's Fantasia fest was RKSS's (the Canadian collective of Anouk & Yoann-Karl Whissell & François Simard) Summer of '84. 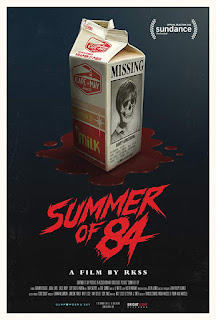 An imaginative teen named Davey (Graham Verchere) becomes convinced his neighbour is a serial killer. He then recruits his three best friends (Judah Lewis, Caleb Emery & Cory Gruter-Andrew) in the task of acquiring incriminating evidence against him.

I felt compelled to write a review of this movie due to my preconceived notions of it. Summer of '84 was yet another script I read sometime ago with my now defunct screenplay club. I was not a fan of it then for a few reasons. However, with decidedly low expectations, I gave the finished product a watch and it turned out to be much better than I was expecting.

My foremost problem with the script was there was a jarring shift in tone that I wasn't crazy about. That's a personal preference thing on my part though, so I get that. I did like that it went places that most films of this ilk do not. What started out as flagrant formula (most notably Amblin + Rear Window) does make some notable sidesteps.

I often find it shocking how much eye-rolling dialogue – and there was a LOT of it in the script – can be smoothed over by talented performers. Most of this movie's successes come down to the chemistry between the four leads. Aesthetically, they seem like a quartet that would never hang out together, but they make it work somehow.

Perhaps the most unlikely relationship in the script was that of Davey (Verchere) and the “girl next door” Nikki (Tiera Skovbye). I remember thinking every interaction between them was going to end with him waking up from a dream, but onscreen it comes off much more sincere and at least semi-plausible. Additionally, I was quite impressed that, after seeing him as Mad Men's Harry Crane (and the goofy protagonist from Firewatch), Rich Sommer can do menacing quite convincingly.

Also considerably toned down was the “Hey it's the 80's” conceit of the source material. Stranger Things is guilty of this to a fault, but here it's much more restrained. The Polybius cameo may have been a bit much, but that didn't stop me from chuckling to myself when it came onscreen. On that note, the Tangerine Dream-esque score by Jean-Philippe Bernier was solid, if it was often counteracted by some heavy-handed sound cues. I'm not sure whether they were a conscious decision from RKSS or just a knee-jerk reaction based on the current status quo of genre filmmaking.

I'm not going to say Summer of '84 was a triumph or anything, but it does do what it does competently and it is definitely a large step-up cinematically for this trio of filmmakers. For their next project, I hope to see them grow even further by shucking their reliance on aping the past and bringing forth something truly fresh and original.