In amongst all the films, patio beers and fine foods, I was able to fit in several extracurricular activities, as well. You'd be surprised how much free time I had now that I wasn't constantly hunkered down in my Airbnb writing reviews. I had some of my best naps in recent memory last week!


The first Fantasia event I attended was a retro screening of Hoi Mang's Blonde Fury on 35mm with Cynthia Rothrock in attendance.

Man, she's a lovely lady with so many stories about the glory days of Kung-fu cinema and the ups and downs of being a outsider in the industry. She regaled us with stories of how it went both ways, as some crews loved her because she was pretty much up for anything and some did not because the concept of “being beat up by a girl” was just too obtuse. There's no question of her icon status though. I mean, how many people can say they've inspired a video game character?


Next, was an In Conversation with genre heavyweight Michael Ironside.

Considering his demeanor onscreen, I was expecting something between surly and grizzled, but it was amazing how affable he was. And the stories, man. So many! After ninety minutes, I felt like I knew the man. He spoke of his beginnings as a playwright and painter, working with Walter Hill, Paul Verhoeven and David Cronenberg as well as some wild tales about his personal experiences with telekinesis. Much to my delight, he even got to sneak in some talk about V.


On Saturday night, I got my picture taken with the star of the new Puppet Master movie. As you know I've always been a Blade fan.

My last day there I checked out the book launch for Michael Gingold's new book, Ad Nauseum. 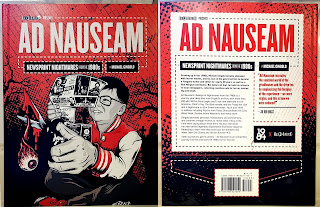 Man, it's like he read my mind. Something as comprehensive as this could only be pulled off by someone who not only lived during the era, but also had the presence of mind to collect EVERYTHING. I'm of a similar ilk, but Mike's got almost a decade on me, so I gladly defer. This book is the best!


Aside from Fantasia events, a group of us walked over to the Grevin Musée to take in some wax figures. I was pretty impressed with the setup there, including the shrine to Alfred Hitchcock.


I was hoping my bae was going to be there--

On our way out of town, we stopped at two movie houses that just happened to be within minutes of where we were staying. Behold, the house from 1983's Of Unknown Origin! 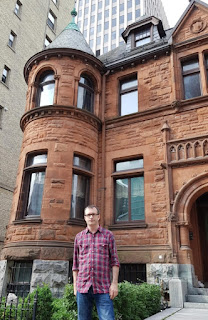 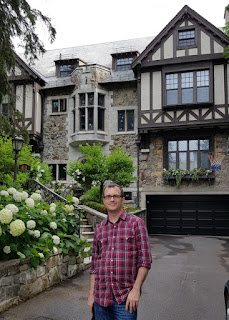 I've been going to Fantasia for eleven years now and I'd say that this trip was top five for sure, maybe even top three! Until next time, bon nuit!
Posted by Jay Clarke at 10:00 AM

You could have gone full circle with Ironside if you had a couple of Labatt Ice's with him.