For the final VHS for Anthology April, I wanted to post about a title that is near and dear to my heart, Michael Armstrong & Stanley A. Long's 1983 effort Screamtime. 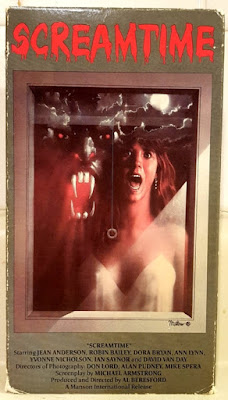 Two petty criminals steal three video tapes from a store and retreat to a friend's house to watch them.


Even though the wraparound is set in New York, Screamtime was a UK production that was released here on Lightning Video in 1985. It's a fairly obscure title, but I'm quite fond of it.


The first story entitled “That's The Way To Do It” sees a aging puppeteer (Robin Bailey) made to choose between his lifelong passion and his family. Though the climax may be a bit obvious, I've always thought the idea of Punch & Judy a bit disturbing.

Next is “Dreamhouse” which is one of my all-time favourite anthology segments. Involving a couple (Ian Saynor & Yvonne Nicholson) moving into an inherited country house, I think it's a great piece of storytelling with a reveal that still gives me chills every time. The gore may be a little sloppy - who stabs like that?! - but there are some well engineered jump scares here. Obviously, it made an impression on director Reg Traviss when he used the climax for his 2010 Charisma Carpenter vehicle Psychosis. I wager Dreamhouse was an influence on Rodrigo Gudiño's debut short The Eyes of Edward James, as well.

The final segment is “Do You Believe in Fairies?” where a couple of youths looking for easy money try to rob two old ladies living in a mansion. They would have gotten away with it too if it wasn't for those darn fairies and gnomes! This one is a bit more sedate than the other two, truth be told I got a bit sleepy during my latest rewatch (it's not nearly as rewarding as Stuart Gordon's similarly themed Dolls) but the two old ladies (Dora Bryan & Jean Anderson) are the most stereotypical English biddies you've ever seen.

The film then wraps up in a manner that is as cheesy as it is abrupt, but no matter. If you can get your hands on Screamtime I recommend giving it a whirl. It may not be as polished as some of the other eighties anthologies out there, but I think you might be surprised by its charm.
Posted by Jay Clarke at 10:00 AM