Wow, what a fantastic trip that was! I was only gone three nights, but boy did I fill it up with some bangin' stuff, including sampling some Alberta beef, a side road trip to Banff with an old friend and the usual festival schmoozing. 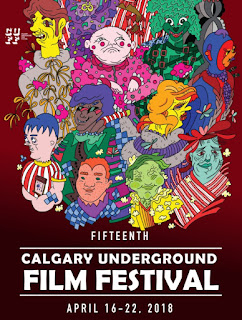 The festival really took care of me, putting me up in a fancy hotel and filling my pockets with cinema food & drink tickets. The Globe Cinema is a great little movie house with a pair of sizable theatres one on top of each other. CUFF turned fifteen this year and you can tell there are lot of regulars and sponsors eager to be involved with the fest. 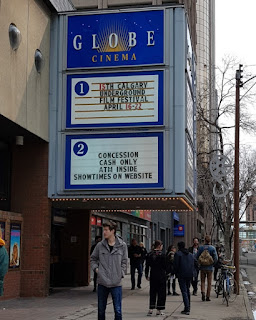 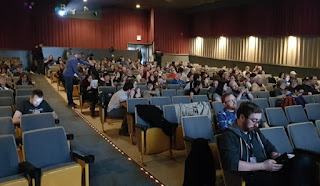 My screening went really well - anytime no one boos is a win - and there were a surprising number of questions during the Q&A. I never thought I would have to explain the difference between Canadians & Americans, always just assumed it was common knowledge, but there you go.

Both shorts programmes were really strong, but I'll elaborate on them in a later post. In addition to the special events at the fest like the Saturday Morning Cereal Party - that involved me chasing after Toucan Sam all morning - and the most recent iteration of the Found Footage Tour, I also took in some cool flicks including the half crime movie, half crime doc American Animals and a rewatch of Coralie Fargeat's Revenge. I recommend both. And Tigers Are Not Afraid. That movie is still aces.

And there's also this random Teletubbies penis sculpture in town for some reason. 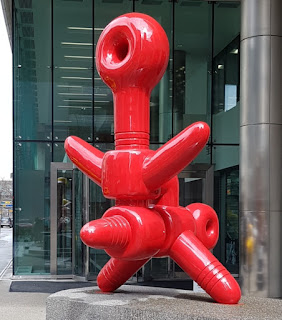 So yeah, I had a blast. I am so thankful to CUFF for inviting me and being such gracious hosts. You guys rock!
Posted by Jay Clarke at 10:00 AM