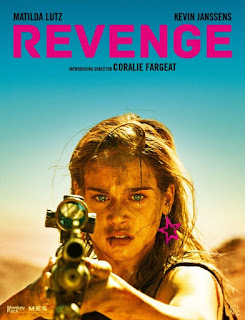 While tagging along on a guys hunting getaway Jen (Matilda Lutz) is raped and left for dead. She soon returns with only one thing on her mind.

I have to admit it took me a considerable amount of time to clock into Revenge, but once I turned the corner I ended up really digging it. Dark comedy is not something (at least as outlandishly as it is portrayed here) I am used to seeing in rape revenge movies, but I was able to embrace it once I realized that the far-fetched and increasingly cartoonish nature of the piece was all part of the plan.

I was equally intrigued and confounded by Fargeat wanting to tackle this subject matter – in her debut in the chair no less – but I can see now that she indeed brought a unique perspective, even just in the way that the inciting incident was presented. It was not lingered on or made to be inherently titillating. In addition to that though, she soaked the movie in a very kinetic style even before the peyote made an appearance.

Fargeat also took the opportunity to lace the picture with some interesting symbolism and metaphor. As she pointed out in the Q&A, her goal was to “take someone who appeared weak and transform them into something powerful” and the lead actress Matilda Lutz performed this action extremely well. Sauntering out of the helicopter at the film's opening like a veritable Lolita, she was beaten down to nothing and then rose from the ashes like a Phoenix (literally) ending up a thousand degrees from where she was.

This all ramped up to an intense last act that contained two wonderfully shot chase sequences using a multitude of techniques. Revenge was lensed in the Moroccan desert (but really could be set anywhere considering the both French and English characters) and she utilized that location to the fullest.

Up until now, the ugly and visceral space of the rape revenge genre has been one dominated by men – this could also be said of the entire Midnight Madness programme though following Roxanne Benjamin and Julia Ducournau's contributions the previous two years perhaps change is afoot – but Fargeat has cleverly subverted this by offering up something that at first may seem puzzling and unwanted, but I wager you'll feel differently once the credits roll.
Posted by Jay Clarke at 10:00 AM