Canuck indie director Colin Minihan's newest effort It Stains the Sands Red has been rolling out over several Canadian cities this week (including Toronto, Ottawa and Edmonton) so I gave it a whirl. 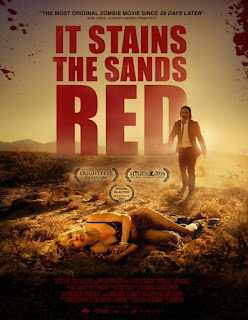 Stranded in the Nevada desert during a zombie apocalypse, Molly (Britanny Allen) tries to literally stay steps ahead of her undead pursuer.

It has been a while since I've seen a movie where I flip-flopped between engaged and annoyed as much as It Stains the Sands Red. It opens pretty rough, introducing us to a couple of idiotic characters doing shit that flies in the face of Horror 101. I remember not being overjoyed I would be watching this for another hour or so.

However, once it got going and I started to realize what the “nugget” of the premise was, I was at least appreciative of what was being attempted. I was on board with the themes of helplessness and the inevitability of death, even if it had been handled more deftly before (It Follows came to mind). I did recognize that these kind of low budget affairs usually have a character stuck in a single room, so Minihan's use of an entire desert was something rather interesting. 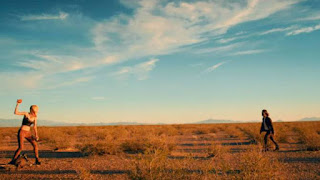 To be honest though, the only thing holding It Stains together – with duct tape and sheer will – was its lead. Allen was in virtually every frame of this movie and she carried it admirably. Her character had an actual arc that went from imminent zombie fodder to empowered survivor. It was this evolution that made me forgive the uncomfortable amount of logic leaps in this movie.

I think my main problem was the erratic tone. Characters made so many boneheaded decisions in the first act that it was hard to take it as anything but a comedy. Then halfway, it takes an unnecessary turn into exploitation territory to where I had to utter, “really guys?” To further muddle things, the piece bordered on straight up drama once the final reel rolled around. 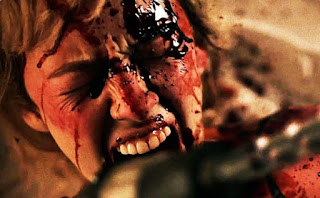 While the execution is shaky at best, I never fully wrote off It Stains the Sands Red. Allen was able to keep me invested enough to want to know where her journey would end up. Gaping wounds aside, it's still a big improvement over Minihan's earlier work. If you are a fan of low budget zombie yarns, give it a go.
Posted by Jay Clarke at 10:00 AM