The Art of the Dreamer.

The eighteen-episode opus of David Lynch & Mark Frost's Twin Peaks: The Return concluded last weekend. The final moments were divisive to say the least, but I guess we should have expected as much. When has anything that Lynch has touched ever been straightforward, right? 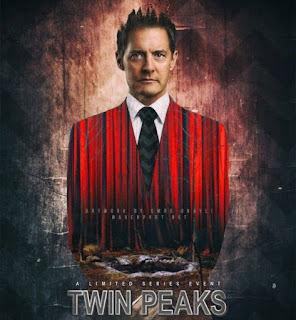 My initial reaction was one of confusion and a hope that this latest thread would be continued in an as-yet unannounced fourth season. Truth be told, the eighteenth stanza of The Return felt more like the premiere of said season, as the previous episode had had more finality to it. However, upon reflection and the further away I get from the finale, the less I feel I need another season. I would love one, but I don't need it. Now being okay with the ending, I think my only disappointment lay with the hanging thread of the Shelly/Red storyline. Although saying that, all roads likely led to pain and sorrow so I'm probably better off. Plus, no confirmation of who ate that bug thing in Episode eight. I'll go with Sarah Palmer, sure that's the ticket... 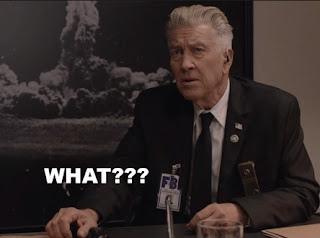 Despite the bewildering effect of the show's final moments, it all makes some kind of sense considering the magicians behind the curtain. The end felt like a nightmare, very much the kind of thing you would see right before you wake in a cold sweat. As with Fire Walk With Me, Lynch & Frost have left us with fragments, again very much like waking from a dream. We have what we need and there are already several interpretations from viewers that fall in line with Lynch's Dreamer Trilogy (Lost Highway, Mulholland Drive & Inland Empire). That's Lynch's M.O. (“Modus Operandi!”) 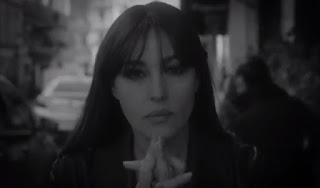 But the Return was not about its ending, it was about the journey viewers had been on for the last three-and-a-half months. This latest string of episodes have produced so many memorable moments, both joyous and vile, and its residue will not leave me for quite some time. Twin Peaks continues to possess an ethereal quality that, like the properties of the Lodge, seem to be able to dissolve time. Some episodes felt so short that I found myself saying “already?” when the end credits appeared and others were the exact opposite. I actually initially thought that the show ended at the end of episode seventeen because my brain thought they must have played the last two together without a break. 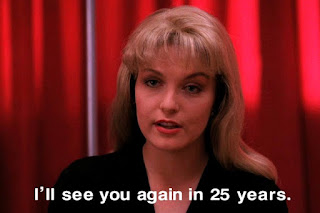 The Twin Peaks experience also included the act of consuming it. My good friend Serena hosted weekly watch parties with donuts, cherry pie and themed cocktails. It was a ritual that brought back the practice of pre-Netflix television. Truth be told, I feel my brain needed those weekly breaks between episodes to digest and theorize just what the hell was going on. It definitely added to it. I wager that binge watching The Return will be a very different experience.

Twin Peaks: The Return was beautiful avant-garde television, the likes of which the medium has never seen and perhaps never will again. Thank you to Lynch & Frost for bringing us along on their vision quest. Thank you to Showtime for their faith in non-conventional storytelling. And thank you to every other cog in this wonderfully confounding wheel.
Posted by Jay Clarke at 10:00 AM

Ha, I actually went to one while I was in Vegas. Not what I was expecting, but can't say I was disappointed :P