A Tale of Three Siblings.

The Canadian indie thriller Blood Honey hit theatres last week. You may have heard about the accompanying world record attempt in downtown Toronto. Anyway I gave it a whirl. 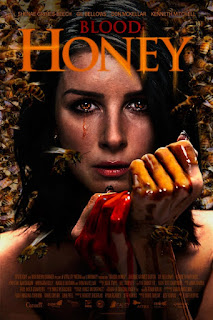 After returning home to a remote Ontario village to see her ailing father, Jenibel (Shenae Grimes-Beech) begins to feel threatened after she received the largest stake holder of his land and on-site apiary business.

Despite its title, there is nothing particularly sweet about this movie. I have to admit, for a Canadian indie, it was one of the best looking I've seen though, as the location (the Northern Ontario town of Britt) was pristine and the perfect locale for a movie like this. I was with it for a while, but when the story ultimately presented where it was going, I was left underwhelmed despite some veteran Canadian players like Don McKellar and Natalie Brown.

Blood Honey felt like a family drama with genre elements shoehorned into it. I have to wonder if someone just didn't take someone's straightforward script and then bring in a third party to make it more Blumhouse-y. The whole bee element was completely superficial and if removed wouldn't have really affected the movie at all, other than they wouldn't have been able to justify all the honey in that bizarrely placed sex scene.

That said, I don't know if the publicity stunt with the bees really helped the movie at all. I guess it got the word out sure - and admittedly a character does die in a similar fashion in the movie – but the whole thing makes the movie seem a whole lot more sensationalist than it actually is. And from my experience, when an audience goes in expecting something and they don't get it, things often don't go well.


The core of Blood Honey is family, but when it showed its DNA, I realized I'd already seen this done much better. Hell, it had even been remade once and nobody asked for it then either. I'm a little saddened by this movie because in some ways it was a step forward in terms of Canadian indie filmmaking, but its disingenuous marketing and construct represent more of a step backward in terms of legitimizing the medium.
Posted by Jay Clarke at 10:00 AM