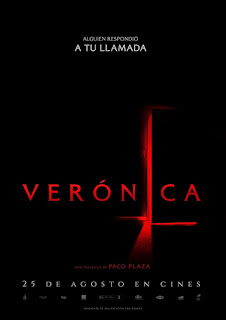 After messing with a Ouija board to contact her dead father, Verónica (Sandra Escacena) senses that she may have brought forth something else much more sinister.

This was another entertaining yarn from Plaza. Carrying over the sensibilities employed on his solo installment of the [REC] series, he was again able to deftly mix horror with light comedy. And while it's true the plot seemed very familiar, it was very well executed. Opening with a setup that echoed that of [REC], Plaza utilized visual flourish and calculated technique to give this piece some real depth. 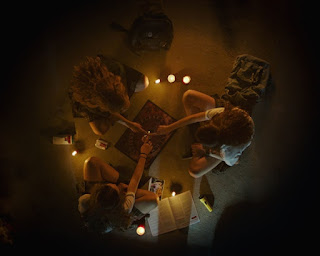 Verónica had some decent set pieces that thankfully didn't overly rely on sound design, as Plaza knew how to let his visuals guide our response. However, I've found over the years that the Spaniards tend to over explain their climaxes and unfortunately Verónica was no different. I found it only a mild annoyance in this case, though.

I thought the performances were another large reason this piece was a success. Escacena was very good as the title character, but it was the entire supporting cast that really anchored the project. Her younger siblings were quite charming and the bickering between them made up the bulk of the comic relief. And I have to say that Consuelo Trujillo really made the most of her clichéd role as the blind and wizened nun Sister Death.


Plaza is a journeyman of his craft and continually shows that through sheer creativity and personality he can make even the most oft-travelled material interesting. Verónica doesn't reinvent the wheel, but it sure makes you have fun riding on it.
Posted by Jay Clarke at 6:00 PM