Coinciding with last Saturday’s Toronto Zombie Walk was a pair of appropriate offerings at The Bloor, as part of the Toronto After Dark Film Festival. 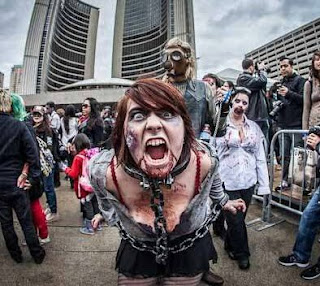 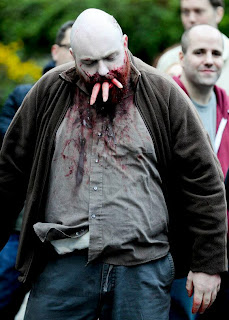 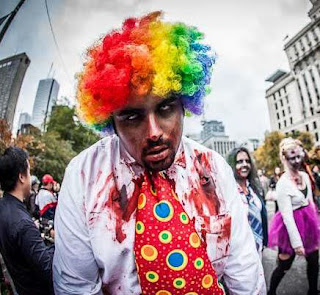 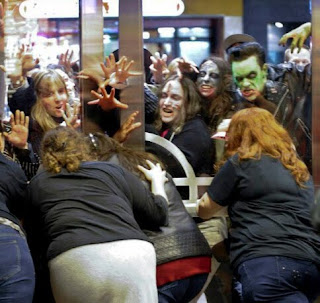 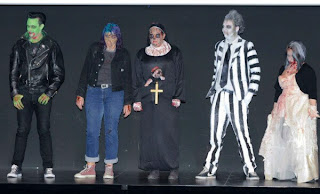 After the groaning crowds had shambled to their seats, first up was Paco Plaza’s [REC]3: Genesis. 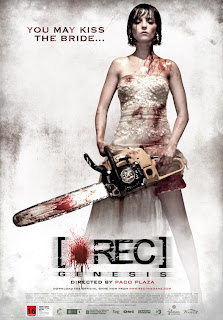 Running parallel with the events of the first pair of [REC] movies, the nearby wedding reception of Koldo (Diego Martin) & Clara (Leticia Dolera) is suddenly overrun with the infected.

[REC]3: Genesis is a bit of a departure from the first two films. After the second film was released, it was announced that for the next two parts directing duties would be divided, with Plaza and Balaguero each helming their own installment separately. I can now see the impetus for this decision, as Plaza was clearly interested in having a little more fun with the series, while his cohort wanted [REC] to remain serious as a heart attack. Genesis is therefore designed as a one-off and [REC]4: Apocalypse will pick up right where [REC]2 left off.

Despite this little tweak, [REC]3 is still the tasty morsel of flesh-eating fun I’ve come to expect from these guys. Although it has a more comedic bent, it never became the full-on splatstick opera that I was expecting. It does get a little bit cheesy toward the end, but it is, after all, a love story, so I was okay with that indulgence, considering the wedding locale was a pretty original place to set a “zombie” massacre. 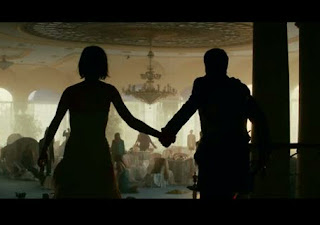 There are some delightfully clever beats in this movie, including references to the original two films, as well as how Plaza subverts the found footage format that the series is known for. [REC]3 also uses the same plot development revealed in the last film to further sync things up. But mostly, I just have to applaud Plaza for again managing to find another wonderful leading lady. Leticia Dolera as Clara is even more striking than Angela (Manuela Velasco), the newscaster protagonist from the previous movies. She has a look that screams, well... Scream Queen, and she's able to wield a chainsaw with the best of ‘em. It appears that fellow Spaniard J.A. Bayona was of the same mind, having used her in the music video he shot earlier this year.

So, I can happily say that this series shows no signs of waning. If anything, it is gaining speed, as each installment seems to grow in budget and scope. I think there will likely be some backlash from fans over what [REC]3 isn't, but hopefully over time it will be re-evaluated, much like Halloween III has over the past few years. It may not share the same tone as it predecessors, but [REC]3 still retains the same energy and pizzazz to make a worthy entry in the series. 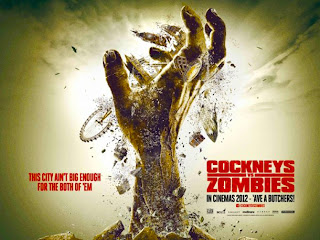 When London’s East End is overrun with zombies, a group of bumbling bank robbers and the occupants of a retirement home try to fight their way out of the city.

This was another enjoyable zombie yarn. During his intro, Hoene spoke of his childhood discovery of Braindead & Evil Dead 2 and they are both clearly on display here. I thought the fact that he and writers James Moran & Lucas Roche were able to incorporate their homeland (Hoene was born in Germany, but grew up in East London) was pretty cool.

Though most of the movie is par for the course zom-com stuff, there were a few things that stood out to me. While most zombie flicks have their heroes having the improvise weaponry due to a lack of ammo, these characters come out armed to the teeth with guns blazing. I have to say it was a nice change of pace to see some superior firepower.

Also, being that half the cast was made up of geriatrics, you can be sure the undead vs. the nearly dead jokes were aplenty. Within this group was the highlight of the film, Ray “Grandpa” McGuire played by Alan Ford, who I instantly recognized – on voice alone – from his turn as Brick Top in Snatch. It was nice to see Honor “Pussy Galore” Blackman show up during the proceedings, as well.

While Cockneys vs Zombies may be largely disposable, there were enough funny moments and gore gags to make it a fun watch.

It was a good double bill this year, and thus the zombie hordes of Toronto were satiated once more.

Photos courtesy of TADFF and NOW Magazine.
Posted by Jay Clarke at 10:00 AM