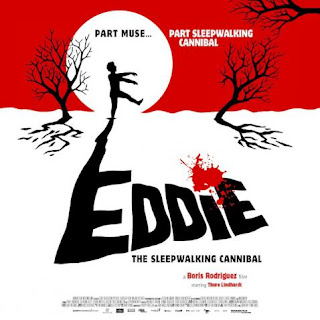 Lars (Thure Lindhardt), a once-famous painter moves to a small town to teach art and hopefully find inspiration. When he ends up taking in one of his students, a mentally-challenged mute named Eddie (Dylan Smith), Lars discovers he has some rather carnivorous nocturnal habits.

Eddie is a curious little film. Its strange tone is not easily classifiable. At its core, it is a comedy, but doesn’t go for the easy laughs, as something like, say A Little Bit Zombie does. Though I had more fun with the latter film, Eddie is clearly the more substantial viewing experience. Director Boris Rodriguez is clearly not one for broad strokes and I think his film caters more to people who appreciate a little more subtlety in their genre films. This could've been a problem, as the majority of Canuck productions come off as being, for lack of a better term, “less than” - Eddie is neither bombastic nor high concept, two things a smaller production usually needs to get noticed – but I think Rodriguez is successful in what he set out to do. There is a thread of sincerity throughout and I found the underlying theme of artist inspiration quite engaging. It took the film to places I wasn’t expecting.

I do feel that if the film had been just simply been called Eddie, and let the “sleepwalking cannibal” part of it be discovered by the viewer, it would’ve been a stronger piece. Unfortunately for Rodriguez, he has a little bit of a Catch 22 on his hands, when it comes to marketing this movie. Narrative aside, he was smart enough to know that the only way to pull people in was to yell, “hey, our movie has a sleepwalking cannibal! Come see!”

Eddie is more than its title though, as it boasts a captivating story and a wealth of balanced performances. Lindhardt, a hugely popular actor in his native Denmark, accomplishes the tough task of making his character run the gamut from sympathetic to diabolical. And, I can add Dylan Smith, who plays the title character, to the list of great roles I’ve seen this year that involve little to no dialogue. This being a Canadian film, I also saw a few familiar faces like the lovely Georgina Reilly (Pontypool) and Paul Braunstein (Johnny from Toronto's mid-2000's primetime soap Train 48).

Though Eddie has its work cut out for it to be noticed in a sea of more outwardly marketable titles, I wouldn’t be surprised at all if this finds an audience. It does all the important things right, and should be rewarded in kind.
Posted by Jay Clarke at 10:00 AM