As with previous installments at Toronto After Dark, its run overlaps with Rue Morgue's monthly Cinemacabre movie night, so this year's co-presentation was the British backwoods horror flick Inbred. 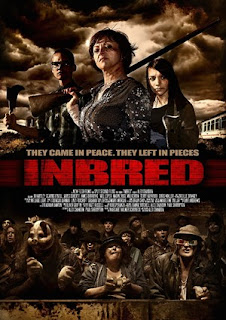 A pair of social workers take a bunch of troubled youths on a field trip into the English countryside, only to be set upon by a bunch of inbred townsfolk.

I didn't much care for this one. I understand that it was supposed to be a dark comedy, but I just never got onboard. There is certainly some fun to be had, but as I've probably said before, I think I'm done with the whole “torturing people is fun” thing. There were certainly people in the crowd who seemed to be enjoying themselves, so maybe I've – for lack of a better term – outgrown this stuff. It sounds odd to say that, but a lot of this movie just washed over me with little or no enjoyment forthcoming. Inbred's tone reminded me of Steven Sheil's 2008 flick Mum & Dad, but less confined and contained, therefore less plausible.

Maybe I'm confused by the intent. Most of the protagonists in this movie are, to use the local colour, a “bunch of twats” so caring about them is relatively impossible. I did manage to latch onto the two female characters eventually, but director Alex Chandon didn't make it easy for me. As the movie goes on, the focus seems to shift towards the townsfolk, as if they are, in fact, supposed to be the heroes of the piece. I  suppose that's not totally outlandish, as virtually the entire American slasher genre was built on that principle, but here it seems broken somehow.

The only thing that Inbred really delivers on, in my opinion, is the gore. Though there is a bit too much CG for my tastes in parts, I also understand that some of the outrageous things that happen in this movie would be almost impossible to do practically. I was also glad to see Jake West muse Emily Booth show up here, albeit briefly.

For me I guess the final nail of dislike in the coffin, was the ending. I mean, sure it was a choice that fit the tone of the movie, but that doesn't mean I have to approve. In contrast to TAD's opener Grabbers, sometimes getting exactly what you expect, isn't a good thing. At the end of the day, I didn't get much out of Inbred, but if this seems like your cup of tea, the trailer is a pretty good representation of what you are in for.
Posted by Jay Clarke at 10:00 AM