Toronto After Dark kicked off last Thursday with the Irish creature feature Grabbers. 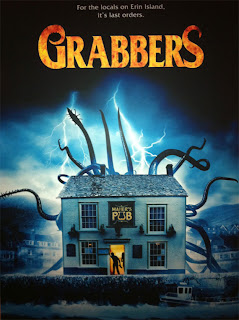 When an alien species of bloodsuckers arrive in a small Irish village, an alcoholic constable (Richard Coyle) discovers that there is but one defense against them – drunkenness.

I’m actually surprised no one had previously come up with this idea – poisoning blood sucking parasites with high blood alcohol content – but I guess it makes sense that the Irish would finally stake a claim.


As for the movie, I think it would be hard not to have a good time with this. While it is true that Grabbers plays it pretty safe in regards to story and subject matter, the whimsical dialogue and truly original jumping-off point made this enjoyable for me. Drunken humour is fairly simple to do, but I felt that the characters and delivery was mined for all it's worth.

The movie is kept at a fairly even keel throughout, which is a skill in itself, as silly horror comedies can often putter out halfway – case in point Jake West’s 2009 effort Doghouse. Director Jon Wright and writer Kevin Lehane are clearly students of the eighties, as there are obvious nods to classic monster movies like Gremlins and Aliens, but they fortunately don't come off as gimmicky because I felt they happened organically.

I was actually quite impressed with the production values of this movie, as well. I was prepared for a one-location siege film set in a pub, but Grabbers largely takes place outside, giving way to wonderfully lush exteriors of Ireland’s seaside. I was also not bothered by the heavy doses of CG. Some shots were better than others, but it helped that the creature designs themselves were pretty solid. 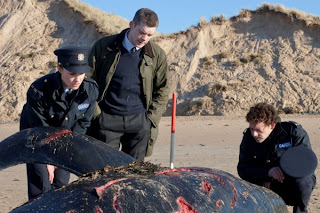 Grabbers isn’t going to knock anybody’s socks off, but it’s a fun yarn with some laugh-out-loud moments and a cool monster. Sometimes getting exactly what you expect isn’t a bad thing.
Posted by Jay Clarke at 10:00 AM

This kind of has been done before, in Days of Darkness. Can't say it was a terrific movie though.

Oh, well there you go!