It Came From The Archives 17!

Happy Halloween everyone!  I have something for you today I’ve been meaning to post for a while now.

Around this time 22 years ago, a special program premiered on television called The Horror Hall of Fame.  Modelled after the Academy Awards, it was specifically designed to celebrate excellence within the horror genre.  It ran annually from 1990-1992 and was hosted by horror icon Robert Englund. 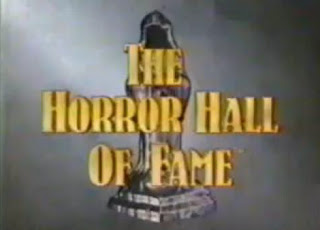 From several sources, including a few fellow YouTubers and my own old crusty SLP recording, I have extrapolated about eighty-five per cent of the original broadcast.  So, kick back and enjoy.

Here below, is the show’s opening courtesy of DIOTD2008.

The first film inducted into The Horror Hall of Fame was Alfred Hitchcock’s Psycho and its presentation can be seen below courtesy of Sally Feldman. Unfortunately, Janet Leigh’s acceptance speech gets cut off at the end.


Sadly, this is the section I could not locate. It included the announcement of the first two Horror Film of the Year nominees (Darkman and Nightbreed), as well as The Exorcist’s induction into the HHoF. The award was presumably presented by Elvira, and accepted by either Linda Blair or Bill Friedkin.

I do, however have Boris Karloff’s induction segment, again courtesy of Sally Feldman.


This is where I take over. I recall just discovering this was on TV while it was airing and threw in a tape. Pardon the quality, but you know how it is. Enjoy the rest of the show!

UPDATE: It appears that Part 3 has been removed from YouTube, so I'm happy to send you the file if you want to hit me up at thehorrorsection@gmail.com.