In honour of AMC's The Walking Dead kicking off its third season tonight, please enjoy this all zombie edition of Don't Kill The Messenger.


There is some fantastic Halloween programming coming up at the Lightbox in a few weeks.  Take a look at this! 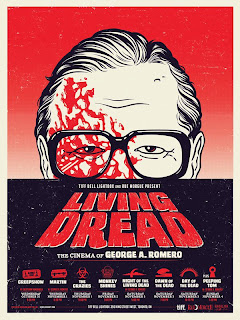 As if a triple bill of George A. Romero's original undead trilogy wasn't enough, the man himself will be on hand throughout the week to introduce some his iconic masterpieces. But wait, there's more! There is also a screening of Michael Powell's 1960 flick Peeping Tom on Nov 4th. Yep, it looks like Christmas came early this year.  For ticket info, click here.

The Apocalypse Will Be Televised.


A week before I will finally get to lay eyes on [REC]3, a teaser trailer for [REC]4: Apocalypse has hit the Web.

Presumably picking up where the second film left off, Apocalypse sees the deadly contagion leaving the confines of the apartment complex and spreading outward.  Let's hope both 3 & 4 build on the nail-biting intensity of the first two installments.

Run For Your Lives.


A few weeks ago, the zombie 5k race event, Run For Your Lives happened in the outskirts of Toronto.  While I was too lazy to run in the event itself, here's some footage (courtesy YouTube user cbass780) of someone who actually did.

It looks like a hell of a lot of fun, though a bit more obstacle-intensive than your standard running race it would appear.


Okay, that's it for today.  Now if you'll excuse me, I have to go sharpen my samurai sword.
Posted by Jay Clarke at 1:18 PM