Before things get crazy with Toronto After Dark this week, I managed to squeeze in a viewing of Sinister. 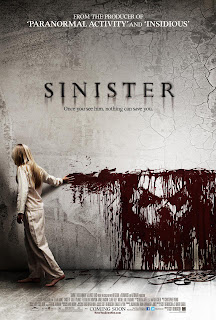 After true-crime writer Ellison Oswalt (Ethan Hawke) and his family move into a new home, he finds a box of home movies in the attic that may shed light on some unsolved murders dating back to the sixties.

Sinister is a functional horror film, but could've been a lot better if its payoff had been as good as its setup. The first frames of this movie, which show silent Super 8 footage of four hooded figures hanging from a tree was rather striking and set the tone well. The movie features about half a dozen of these home movie horrors, and they are by far the most unsettling bits of the movie. I also want to single out composer Christopher Young, as his excellent score definitely heightened the mood. His contribution, with its muted drones and other identifiable noises, really added to the grim happenings onscreen.

I dug the first hour of this movie, but once the home movies were played out, the rest of the scare tactics employed by director Scott Derrickson felt staged and arbitrary. The mystery of the found footage was darkly fascinating, but the rest of Sinister just seemed to be Hawke either stewing in his office or skulking around the house at night, just asking for things to jump out at him from the shadows.

There were other things about Sinister I found puzzling. Shoving the usual horror trope logistics aside, I really had trouble accepting that Oswalt's wife Tracy (Juliet Rylance) would uproot their family to move to a place she apparently had zero knowledge of. Then, there was the ending, which was played out like a big reveal, even though the film was structured – and decidedly marketed – as to render the last few beats fairly obvious from almost the get-go.

Looking through director Derrickson's filmography, I discovered he was responsible for the under appreciated 2005 possession flick The Exorcism of Emily Rose. Though that movie abandoned most of its genre underpinnings halfway though by ostensibly turning into a courtroom drama, I felt that picture carried a lot more weight than this one did.

Even with these gripes, Sinister is still better than most of the Hollywood fare that's been trotted out in the last few months – though I do feel last month's The Possession had more richly written child characters and better actors portraying them. If we're keeping score at home, I'd have to say that James Wan's Insidious still reigns supreme when it comes to recent fare of this ilk.
Posted by Jay Clarke at 10:00 AM