So  I was gathering clips for an upcoming video and I happened to watch Girls Nite Out, Robert Deubel's 1982 slasher. 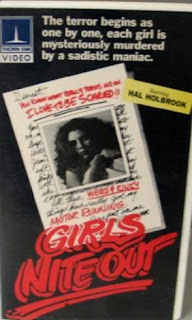 I was aware of it of course, but had never actually watched it before. Holy moley, is there a lot going on in this movie! I kept on muttering to myself, geez this movie is elaborate. So much setup. I always thought The Initiation took its time (with it basically being an Animal House-style comedy until they all get locked up in the mall), but Girls Nite Out takes the cake.


There are so many characters introduced in the first act, for no real reason other than to confuse the audience. There's not one, but two beleaguered ex-boyfriends and one guy with two girlfriends. It was really hard keeping track of all the ladies at times. There's main guy's two girlfriends, the girl with big glasses, the girl with big glasses' best friend and the girl from Friday the 13th Part 2. Meanwhile, overseeing all this happen, is Hal Holbrook because he's in this for some reason.

But, the story is overly complicated, as well. It somewhat revolves around a campus-wide scavenger hunt, but the only people playing it are conveniently the people that the killer wants to off. And why is this movie called Girls Nite Out? It's not a bachelorette party, or a sorority hazing. And if its their night out, why is their no Final Girl??? Not even the alternate title of The Scaremaker makes any sense. I'm so confused.


All that aside, I am absolutely shocked that horror fans don't talk about this movie more, just for the fact that the killer wears a FUCKING BEAR MASCOT COSTUME WITH KITCHEN KNIVES FOR CLAWS. 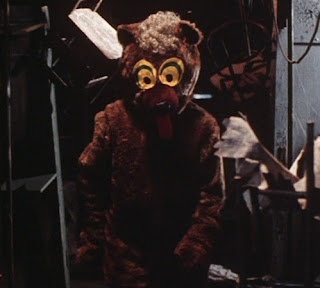 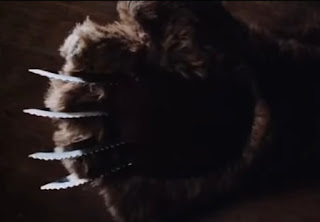 That's worth the price of admission right there, folks. So, yeah if you like unnecessarily labyrinthine narratives in your slashers, have at it. But keep in mind FUCKING BEAR MASCOT COSTUME WITH KITCHEN KNIVES FOR CLAWS!
Posted by Jay Clarke at 10:00 AM