Here is the trailer for Frank LaLoggia's 1988 film Lady In White.


I adore this movie and was so happy that the guys who run the Laser Blast Film Society ran a screening of it at The Royal last week. I've always had a strong affinity for films that feature child protagonists in extraordinarily dangerous circumstances. Amblin did very well with this in their day, but I really loved the films that went so much further, titles like Richard Franklin's Cloak & Dagger & Bernard Rose's Paperhouse,

Lady In White on the surface seems like your average kid's horror film, but once you're inside, it reveals very adult themes like child murder, vigilantism and racism. I liken it to Stand By Me (in that a writer recounts his childhood in a small town) if Frank Dodd (the Castle Rock serial killer from The Dead Zone) had been skulking around two decades earlier. 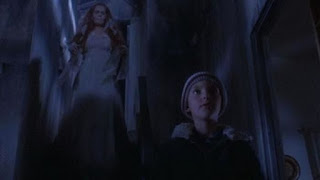 It is regrettable that Frank LaLoggia only ever made two films (the whacked out devil-incarnate slasher Fear No Evil being the other) because The Lady In White was an incredibly well made, well directed effort. Fortunately, Shout Factory released a new Blu-ray of the picture last month, so hopefully it now will be rediscovered by a new generation of viewers.
Posted by Jay Clarke at 10:00 AM