I'm closing out my Ithaca Fantastik coverage with a nod to their dynamic and well-rounded short film programming. Over the course of its five-day run, the festival screened about twenty shorts, within their own blocks and also ahead of features.

While there were some current festival favourites on display here, like Curve, The Home and Do You See What I See? (Toronto represent!) I also caught a few others of note.


Alex Kavutskiy & Ariel Gardner's Judy tread a predictable line, yet somehow managed to be a little bit quirky, a little bit gross and a little bit disturbing all at once. The contrast between its comedic tone and ugly truths conjured by its conclusion is likely the reason I've come back to thinking about it the past few days. And hey whaddaya know, it's online.


Very deservedly, André Øvredal's The Tunnel won best short film at Ithaca Fantastik. This is just the kind of wonderful world building that is at the root of the best science fiction. It transports us to another time and place, yet keeps us grounded with a very human story. A tremendous piece of work.


I also like that Ithaca gave some love to the long form short film format. It is very difficult for short filmmakers with visions over fifteen minutes long to get their work seen, as their length makes them difficult to program. Not so, here though however!


I was glad to see A Nearly Perfect Blue Sky had a showing at IFFF. I'm sure it gripped as many people here, as it did when I saw it in Montreal. Also on tap was Brendan Lescure's delightful yarn The Backpage that was best described to me as Evil Dead meets When Harry Met Sally. 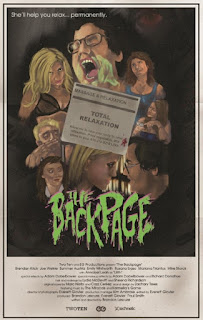 Again, I can't say how much I was impressed with Ithaca Fantastik. With its sublime programming and presentation, I think it is fair to say this will not be the last time I find myself just south of the Cayuga.
Posted by Jay Clarke at 6:00 AM