One of the many awesome documentaries I got to see while at Ithaca Fantastik last week was Gilles Penso & Alex Poncet's Creature Designers - The Frankenstein Complex. 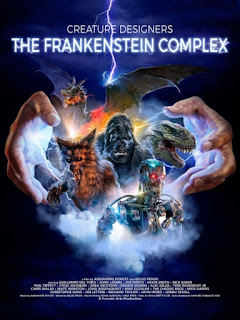 A pseudo-sequel to Penso's 2011 piece on the legendary stop-motion artist Ray Harryhausen, this doc focuses on the next wave of creature effects artists that grew up admiring his work, including Rick Baker, Steve Johnson, Greg Nicotero and Phil Tippett. It should be no surprise that I loved this doc and had a huge smile on my face through most of its running time.


Creature Designers gives you a wonderful peek behind the curtain of some of cinema's greatest monsters. Starting with the work of Lon Chaney and Jack Pierce, it transitions into the first recognized master of the modern era, Dick Smith. Much credit is given to Star Wars for opening things up, but the doors were really blown off in 1981 with the coming of three pictures - Joe Dante's The Howling, John Landis' An American Werewolf In London and John Carpenter's The Thing.

The range of artists featured in this doc was astounding (Rob Bottin and Kevin Yagher being notable omissions) as well as the collective body of work of these silicone heroes. You can tell they all love what they do.

Post-Jurassic Park however, things took a distressing turn. Most directors will agree that the best possible results come from a mix of practical and digital, but these days it seems that studios tend to rely on the latter a little too much. I said I had a smile on my face through MOST of the doc, but it was replaced with a frown when I heard Rick Baker and the guys at Amalgamated Dynamics relate their horror stories about having their hard work replaced or removed from the final product.


I have a feeling we may be headed for a swing back the other way. Film is cyclical and I'm confident that slashers and home invasion thrillers may soon be overrun by the creature fantastic. Considering what we got coming the next four years, I think we've had our fill of real world horrors. And like the Baker's and Bottin's grew up with Harryhausen's stop-motion wonders, my generation grew up with Baker and Bottin's tangible and textured monstrosities. Let's all do them proud, ladies and gents.

Anyway, if this doc happens to hit your Netflix, give it a shot, as it is a delightful look at one of the main reasons I became a horror fan.
Posted by Jay Clarke at 10:00 AM