Kicking off the Blood In The Snow festivities last night was Kevin Burke's poster art documentary, Twenty-Four by Thirty-Six. 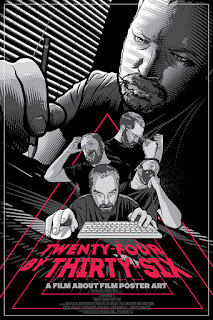 Having been a contributor to the project's Kickstarter campaign, I had been awaiting this for some time. I'd seen little snips here-and-there at various conventions and gallery events over the last year, so it was great to finally get my eyeballs on this thing. Like my experience with Creature Designers, it was so wonderful to see a loving exploration of something I hold dear.

I think there were three things that made this a decent documentary, the first being presentation. Now obviously I was wowed by all the posters that were constantly flashing onscreen, but they were also accompanied by animations that really made them pop. Second, Burke went out of his way to find a lot of subjects for his documentary. Not only did he have scores of artists like Roger Kastel, William Stout, Gary Pullin and Jason Edmiston weighing in on their craft, but also collectors and people whom their work has touched over the years. Lastly, there are a wide range of topics discussed that really open you up to the business and cultural side of things.

I mentioned Creature Designers earlier because both vocations share evolutionary similarities, as they struggled to get individual recognition in their early days. In 24 x 36, we learn that iconic artist John Alvin had to cleverly hide his signature to prevent the studios from removing it. 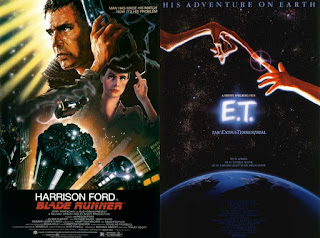 In addition, while effects artists had to deal with the advent of CGI in the nineties, poster illustrators butted heads with Photoshop and the “floating heads” era.

Fortunately, the latter issue was rectified by the coming of MondoTees. Over the last ten years, illustrated movie posters have been making a comeback. Indie films have often adopted these posters to stand out in the crowd and the studios are slowly coming around, as well.

Deep into the documentary, it discusses the second market that has emerged from the MondoTees phenomena. It is common practice now that, just like live event tickets, posters will be sold out in seconds and then subsequently appear online for one-hundred times their selling price. I can't tell you how many posters I saw in this doc where I was like 'oh yeah, I tried to get that one. And that one. Yep, that one too'. I really liked that artist Tim Doyle has tried to buck that trend, even after received some flack for devaluing his pieces.


24 x 36 was well worth the wait. For cinephiles, this doc is a no-brainer, but I also think anyone would be able to appreciate the artistry and inner-workings of this business, both initially and nowadays.
Posted by Jay Clarke at 12:00 PM