So, I’m not looking at a vintage VHS title today, but Christopher Phelps & Maxim Von Scoy’s cabin-in-the-woods slasher, Lake Nowhere very well could have been. 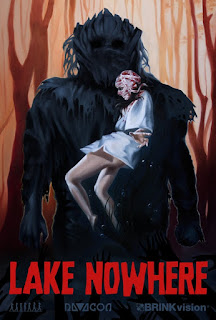 It was a long journey to get this movie made, as the crowdfunding teaser pitch first surfaced online in 2013. After a very tumultuous production with some additional footage being shot much later, the final product finally hit Vimeo last week. Lake Nowhere was made by a collective called Ravacon that, much like Canada’s Astron 6, revels in that home video B-movie aesthetic. Although, Ravacon’s output is decidedly not as overtly comical as their Northern counterparts.

I thought Lake Nowhere was pretty entertaining. In typical retro fashion, the piece starts out with some highly amusing faux trailers. The Italian gillao The River Runs Red was as spot on a representation of that subgenre as Edgar Wright’s Don’t from back in 2007 and the extended trailer for Harvest Man played out like a cross between Treevenge and an old GI Joe cartoon I remember watching as a kid. These trailers book-ended a beer commercial for Wolf White that made me momentarily question if I wasn’t watching a Canadian production.

But, onto our feature presentation. Lake Nowhere was a super authentic portrayal of the home video era horror. If Phelps & Scoy were trying to emulate the dark and washed out look of The Evil Dead, they succeeded. Helped out by extensive VHS degradation that thankfully died down before it got too distracting, this movie was almost indistinguishable from its eighties counterparts.

The story was fairly standard and contained your average genre setups, but I did appreciate that it wasn’t clearly evident who the final girl (of the three lovely actresses Laura Hajek, Wray Villanova and Melody Kology) was going to be. The main antagonist was pretty menacing in that he towered over the rest of the cast in much the way Kane Hodder did in the later Friday the 13th films. As for the gore gags, they were fairly well done, almost charming in that lo-fi kind of way.

Lake Nowhere came to a close in fifty minutes, which meant that not only did it not overstay its welcome, but that the filmmakers shied away from committing the crime made by so many indie horrors of padding out their product to feature length. Though this curt length naturally made traditional distribution avenues problematic, it has fortunately found a home on Vimeo.

If you’re a fan of vintage slashers and Don Dohler’s age-old adage “blood, boobs and beast”, then head on over to Vimeo to rent Lake Nowhere for a mere three dollars.


Case of Wolf White not included.
Posted by Jay Clarke at 12:30 PM