This review was a long time coming. Stranger Things released on Netflix the day I left for Fantasia, so I wasn't able to tear into it until after I returned. Of course, by that time, pretty much almost everyone had binged watched it, created memes and moved on. So, I wondered if it was even worth posting about. But, in the end, it seemed wrong not to. 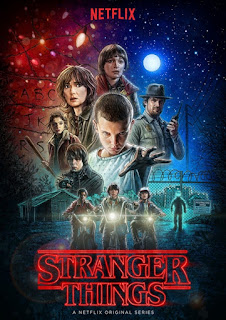 As you would expect, I really, really enjoyed this series. It was a simmering pot of so many things I hold dear. Imagine the three witches from Macbeth perched in their cave, throwing in every scrap of beloved eighties pop culture they can get their hands on. Let's break it down...

Stranger Things succeeds in large part due to its casting. I was impressed by the instant camaraderie built between the four friends, Mike (Finn Wolfhard), Will (Noah Schnapp), Dustin (Gaten Matarazzo) and Lucas (Caleb McLaughlin) In real life groups of chums, there are always smaller pairs that are closer than the rest, and this was the best portrayal I've seen of this since Stephen King's Stand By Me. But, as you no doubt realized early on, Stranger Things was seventy-five per cent Spielberg and King. Rounding out the young cast was Millie Bobby Brown as the mysterious Eleven. She was superb, having to run the gamut of emotions from rage to sadness.

Most importantly, I was so happy to see Winona Ryder in this. I heard some online chatter about how sobby she was, and I'll never understand that. She played it perfectly in my opinion. Do you know how hard it is to play someone that wrecked with grief? Not only that, but make you want to, at times, reach through the screen, wrap them in a blanket and tell them everything is going to be okay. During the bit with the Xmas light messages showed up, I think that was where I went, yeah there's really something to this. Oh, and Matthew Modine doing his best David Cronenberg impression, that was ace!

The music of Stranger Things played a huge part in this series. First off, Netflix has proved once again that they have more money that God to be able to afford all those wicked eighties songs they put in there. Then, to furthermore have it accentuated by a ton of synth-wave goodies from Kyle Dixon and Michael Stein that sounded like the resulting offspring of a three-way between John Carpenter, Alan Howarth and Tangerine Dream. I can assure you that upcoming soundtrack release is going to do very, very well.


When most people were talking about Stranger Things, they weren't only praising the show, but also pointing out all the references of which were legion, as almost every scene, character and set dress harkened back to that age of pop culture. It brought a lot of smiles to my face, and there were only a few times where I thought perhaps they were reaching (just how easy were posters of Evil Dead and The Thing to come by in 1983?). However, I did love that, “take that down, it's inappropriate” bit in regards to Raimi's aforementioned masterpiece.

Even though I did really love this show, I have to admit that I liked the first four episodes better than the last four. It was those first few episodes that, even though they were built on the backs of two iconic Steves, there was a lot of originality, the characters felt real and there was tremendous thematic weight. Then around episode five-ish, I found myself having to suspend my disbelief where I hadn't before. Rather than doing things organically, characters began to more noticeably do them to drive plot. Whereas before I was thinking to myself, geez if my brother & I watched this back in '83, would we have known?, I then began to see more modern conventions, like the CG monster that consequently became less scary the more it was shown. Even the more we saw of the “upside down” (which, by the way, was a fucking awesome name for a parallel dimension), the more it reminded me of Silent Hill. I was always enjoying myself, and it by no means went off the rails like the similarly-themed Super 8, but the last few episodes were difference between super great and just great.


So there, I think I've said my piece. I will definitely watch this through again before Season 2 comes around because it really is something special beyond all its nostalgic ingredients. Mainly, it gives me hope, as I am currently working on a script that borrows from a lot of beloved eighties tropes and it's nice to know there is still an accepting audience of it.
Posted by Jay Clarke at 10:00 AM