How I Spent My Summer Vacation.

Super 8 might seem like a strange one to be reviewing here, but The Horror Section is nothing if not nostalgic, so it kind of fits, wouldn't you say? 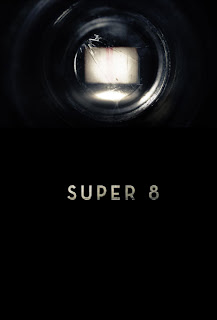 A group of children witness a train crash while filming their Super 8 zombie movie. Shortly after, when strange things start happening in their town and the military shows up, they realize there may be something more sinister going on.
I enjoyed this movie a lot, but couldn’t help feeling somewhat unfulfilled afterward. Super 8 feels like two films. The first is the coming-of-age tale that Amblin is so well known for, having given us E.T. and Goonies, and the second is JJ Abrams’ Cloverfield-style monster movie. The unfulfilling part is that one of those is a sight more interesting than the other. All the stuff with the kids interacting with each other, while making their Super 8 movie was fantastic and really the meat of the film. It not only made me fondly remember similar movies from the eighties, but also my own childhood summer vacations, where, for two months, the sky was the limit. 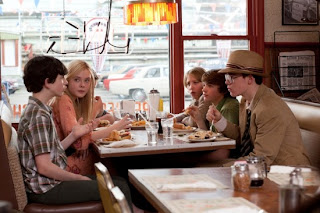 Unfortunately, when the monster movie takes over in the third act, Super 8 begins to stall. The back-story should have been engaging, but wasn’t and that disconnection hurt the conclusion, as it should have been more impactful than it actually was. This is a shame because the setup is near flawless. There were so many subtle touches reminiscent of Steven Spielberg that I had to keep reminding myself that he wasn’t directing it. Just the crafting of the first few moments – and how much information is conveyed without dialogue – brought me great joy and reassured me I was in good hands.
I have to mention that I wasn’t all that impressed with the “monster” though. Everything leading up to the reveal was fine, but the majority after that was excessively dark or murky – though with the piss poor maintenance of multiplex projectors these days, who can say if I was seeing the intended result? I was surprised to find that ILM did the effects because there’s a big onscreen difference between Super 8 and Transformers. But then again, there’s also a gap of two hundred million dollars, so I should probably cut Super 8 some slack in that regard. I was just expecting them to be a step up from Cloverfield – now over three years old! – and they weren’t. 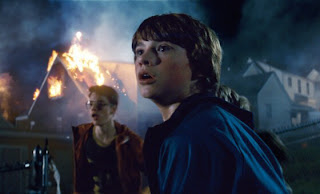 Overall, Super 8 is a solid flick. The mystery surrounding the movie may be what gets you in the seat, but what you’ll take away is the time spent with Joe (Joel Courtney), Alison (Elle Fanning) and the rest of the gang. To confirm this, you need to look no further than the end credits, where you get to see the finished film the kids were making during Super 8. It’s one of the best parts of the movie and a nice little touch that will at least have you walking out of the theatre with a smile on your face.
Posted by Jay Clarke at 10:02 AM